Man fighting for life after he's struck, trapped underneath motorhome in Victoria 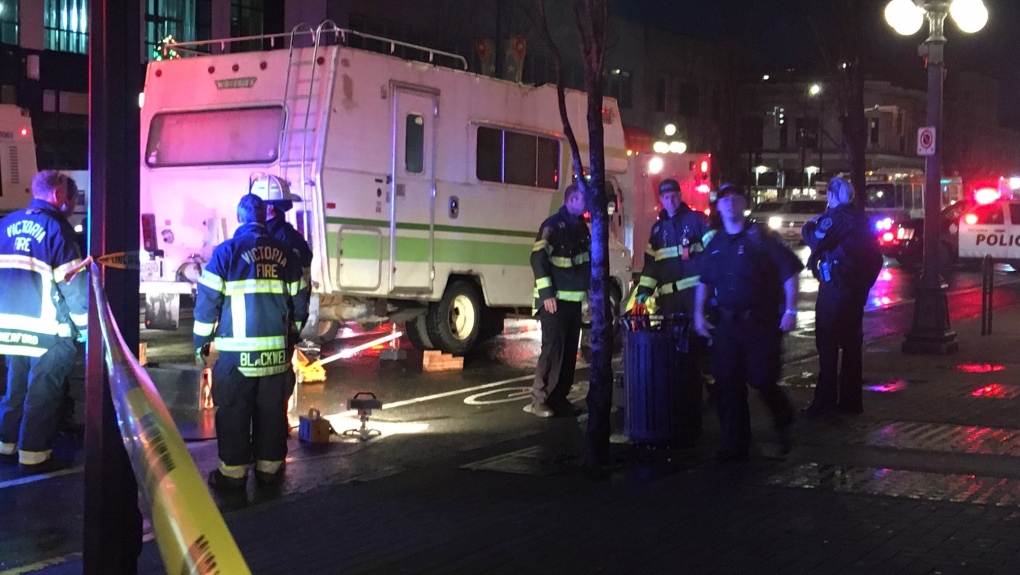 Police say a motorhome had to be jacked up to extricate a skateboarder struck in downtown Victoria Tuesday, Nov. 27, 2018. (CTV Vancouver Island)

A man was rushed to hospital with life-threatening injuries after he was struck by a motorhome in downtown Victoria and became trapped underneath.

First responders were called to the intersection of Douglas and View streets just before 6:30 a.m. Tuesday morning.

They found a man trapped under an older Class C motorhome and had to jack the vehicle up to lift it off the man. He was reportedly trapped underneath for about 20 to 30 minutes, according to police.

"It was quite the operation for them to do that. The man was quite tangled up underneath the vehicle," said VicPD Sgt. Kari Cochrane.

Preliminary investigation found that the camper was turning left from View onto Douglas when it struck the man.

The camper continued through the intersection while the man was trapped under the rear axle of the vehicle, Cochrane said.

Police say the investigation into the cause of the collision is ongoing, and that impairment could be a factor.

The driver of the camper remained on scene and was cooperative with officers, Cochrane said.

Several blocks of Douglas Street were shut down during the morning rush hour as police, including a traffic analyst unit, investigated.

Correction: An earlier version of this story reported the pedestrian struck was on a skateboard. Police have clarified he was walking when he was struck.

Douglas Street north bound is shut down from Fort to Yates after a pedestrian was struck and pinned under an RV. He was taken to hospital by ambulance and the RV remains jacked up on scene while police investigate pic.twitter.com/HDk7mJKmqc

Motorhome now being towed from scene of collision in downtown Victoria. More on this morning's crash that left a man with life-threatening injuries: https://t.co/xANYYaUVsY pic.twitter.com/6SxvZCdIfO