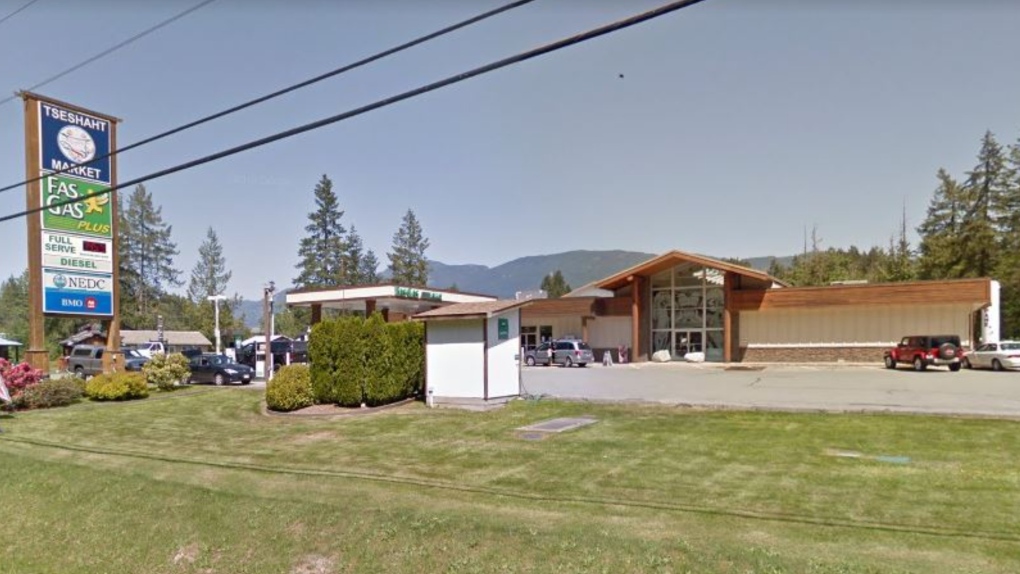 A man has been arrested after someone threw a glass bottle at the Tsehaht Market and shattered the glass door. (Google Maps)

PORT ALBERNI -- As part of the Tseshaht First Nation's safety protocols, patrons are required to wear a facemask and sanitize their hands before entering the Tsehaht Market.

The issue escalated mid-November when a customer entered the market and started yelling vulgar phrases, objecting to sanitizing his hands.

After walking towards a female employee in what she described as an “aggressive” approach, male staff intervened and escorted the customer out of the store. Before driving away, staff took photos of his vehicle.

At approximately 5:30 the following morning, a male threw a glass bottle at the market and shattered the glass door. Security cameras confirmed that the vehicle involved in the incident correlated with the car from the day before.

“There is no place for this type of behaviour in a civilized society,” Braker said in a release. “Our staff and customers were exposed to unruly behaviour and assault. People must accept the measures we are taking in our community to prevent the spread of COVID-19 or they can stay away.”

On the morning of Nov. 11, the incident was reported to the Port Alberni RCMP detachment. After accessing CCTV footage, investigators identified the perpetrator.

Joel Desjardins-Lavoie was arrested for mischief and remains in custody. He was also wanted on warrants from the province of Quebec for uttering threats, said RCMP Cpl. Jason Racz.

He is scheduled to appear in court on Dec. 16.

Braker said the nation is doing “everything” they can to stop the spread of COVID-19.

With four confirmed cases within Tseshaht's membership, Braker said the pandemic is “top of mind.”

“Living on reserve we have about 70 elders and we're sensitive to the fact that they are extremely vulnerable,” said Braker. “Other members in our tribe have compromised immune systems and they are very vulnerable. We're doing everything we can to protect these people.”

The nation is distributing cleaning packages that will go to every member's household within the Port Alberni area. They include hand sanitizer, sanitizing wipes, Clorox disinfecting spray, gloves and masks.

"I would like to remind people of the responsibility we have to keep everyone safe,” said Ken Watts, Tseshaht councillor and member of the Tseshaht Market board of directors. “The Tseshaht council condemns the actions of this individual. We encourage everyone to embrace Dr. Henry's thoughts on this being our time to 'be kind, be calm and be safe.'"