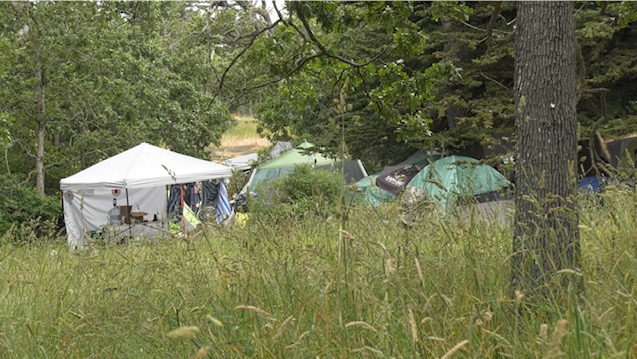 A woman called police at 9:30 p.m. to report she had been choked and then threatened with a gun inside a tent. (CTV News)

VICTORIA -- One man has been arrested and released from custody after an alleged violent assault inside a tent in Victoria’s Beacon Hill Park.

Victoria police were called to the park Saturday night for reports of an assault and an assault with a weapon.

A woman called police at 9:30 p.m. to report she had been choked and then threatened with a gun inside a tent.

Police and paramedics located the woman and she was treated at the scene for non-life-threatening injuries.

Police say they located the accused’s tent and took him into custody without incident. The man was arrested for assault by choking and assault with a weapon, however a gun was not recovered from the scene.

The man was taken to Victoria police cells and released with a court date and conditions.

The case remains under investigation and anyone with information is asked to contact the Victoria police at 250-995-7654 or provide tips anonymously to Greater Victoria Crime Stoppers at 1-800-222-8477.

During the course of the assault investigation, police arrested another man who was wanted for breach of probation in an unrelated robbery case in Port Alberni.

The man was also transported to VicPD cells and was held for a court appearance.