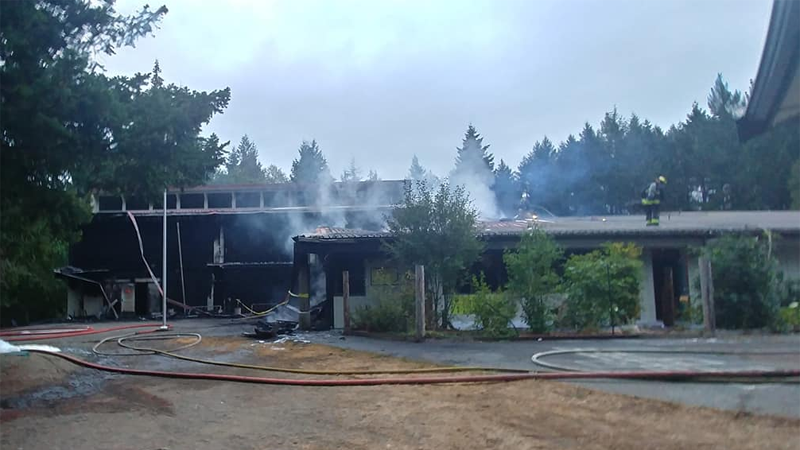 The damage is still being assessed after a fire broke out at Hornby Island Community School, but officials said it is significant. (Facebook/Brittany Jenna Andrews)

A 25-year-old Comox Valley man has been arrested in connection with a fire that severely damaged the only school on Hornby Island a week before classes were set to begin.

The suspect, whose name is under a publication ban, was recently taken into custody in Courtenay after a warrant was issued for his arrest, according to Comox Valley RCMP.

He has been charged with one count of arson in the fire at Hornby Island Community School.

The fire broke out around 5:30 a.m. on Sunday, Aug. 26, and rendered a large part of the facility unsafe and unusable with little more than a week until the first day of school.

Last week, investigators deemed the blaze suspicious, identified a person of interest and appealed to the public for tips.

It's unclear when the man was arrested, but he was expected to appear in court at 9:30 a.m. Tuesday morning.

The Comox Valley School District scrambled to make other arrangements for the 40 or so students on Hornby Island displaced by the fire.

Starting Tuesday, they kicked off their semester in a three-day educational program based at Tribune Bay Outdoor Education Centre, which is also located on Hornby Island.

A long-term solution for replacing and repairing the school has not been identified, but in a recent meeting with parents, the district said it was looking into installing portables.

The district has also promised parents that children will not be required to attend school off Hornby Island.