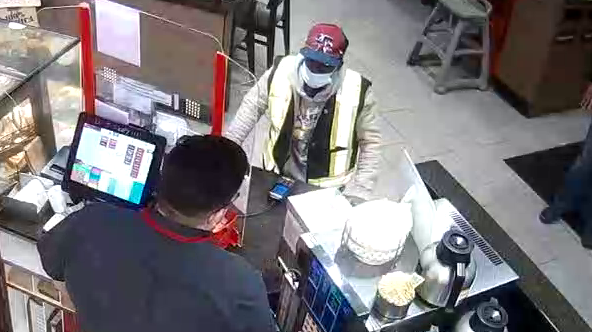 Mounties say the man bought a coffee at the store's drive-thru before confronting staff inside. (RCMP)

One man has been arrested after an alleged coffee-throwing incident at a Tim Hortons in Langford, B.C.

The incident happened on Jan. 13, when the West Shore RCMP say a man returned to the store at 845 Goldstream Ave. after he was refused service for not wearing a mask the day before.

Mounties say the man bought a coffee at the store's drive-thru before confronting staff inside.

The man then allegedly threw the coffee at an employee and left.

"Luckily, the staff member did not sustain any physical injuries," said RCMP Cpl. Alex Bérubé in a statement Friday.

A suspect was arrested Monday with the assistance of Saanich police.

He is set to appear in court on March 17.

One man is dead after being shot by police near a Toronto elementary school on Thursday afternoon. The incident sent hundreds of students into lockdown.

Police: Texas gunman was inside the school for over an hour

The gunman who massacred 19 children and two teachers at a Texas elementary school was inside for more than an hour before he was killed in a shootout, law enforcement authorities said Thursday amid mounting public anger and scrutiny over their response to the rampage.

There are now 26 confirmed cases of monkeypox in Canada, according to an update from the Public Health Agency of Canada, and the virus has been detected in a new province, with one case in Ontario.

Ukrainian Prime Minister Denys Shmyhal says the West must not give in to Russian pressure to ease sanctions in order to restart the flow of agricultural exports.

Amber Heard told jurors Thursday that a harassment campaign waged against her by ex-husband Johnny Depp has left her humiliated and scared for her life from multiple death threats, and said she just wants 'Johnny to leave me alone.'