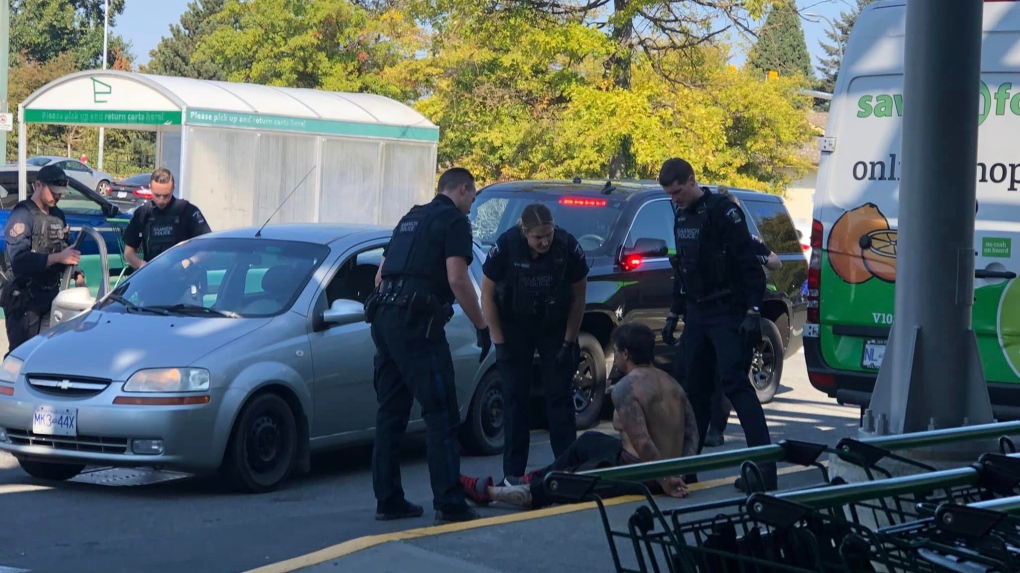 Saanich police are crediting witnesses with helping track down a man who reportedly wielded a knife and drove erratically through both Victoria and Saanich on Sunday afternoon.

Witnesses first called 911 around 12:40 p.m. saying that a Chevrolet Aveo was driving dangerously in the 2500-block of Blanshard Street.

Soon after, another witness said the driver of the Chevrolet had exited their car and pulled a knife on another driver just one block away, according to Saanich police.

Another person then reported that a man with a knife confronted them on the street in the 3200-block of Blanshard Street soon after.

"The erratic driving continued with the driver of the Chevrolet Aveo failing to stop at red lights, passing unsafely, and speeding," said Saanich police in a release Sunday.

Witnesses continued to call 911 until police were notified that the driver had parked at a Save on Foods grocery store in the Saanich Plaza in the 3500-blok of Blanshard Street.

Both Saanich and Victoria police officers rushed to the scene and tried to de-escalated the situation, according to Saanich police.

Officers believe the man was experiencing a mental health crisis and appeared to have a self-inflicted wound.

The man was eventually taken into custody and was given medical attention, according to Saanich police.

The 36-year-old man is facing recommended charges of possession of a weapon for a dangerous purpose, uttering threats, and two counts of assault with a weapon.

After he was taken into custody, police say they also learned that the Greater Victoria man was out on parole and had an outstanding warrant for his arrest.

The investigation is ongoing and police say victims have been connected with support services.

"This multijurisdictional incident could not have been remedied so quickly had it not been for the excellent awareness and communication of the witnesses involved," said D/Sgt. Damian Kowalewich, spokesperson for Saanich police, in a statement.

"It was fortunate that no other drivers, pedestrians, or cyclists were injured given the overall erratic driving and behaviour of the driver."

The City of Montreal will pay more than $3 million to hundreds of protestors whose rights were violated by city police. The settlement will end eight long-running class action lawsuits against the city that allege participants in six protests were illegally arrested or detained by police and were unable to exercise other fundamental rights.

A 4.8-magnitude earthquake shook homes on Vancouver Island Friday night, but no damage has been reported, according to Earthquakes Canada.

Oscar, Golden Globe and two-time Grammy winning singer-actress Irene Cara, who starred and sang the title cut from the 1980 hit movie 'Fame' and then belted out the era-defining hit 'Flashdance ... What a Feeling' from 1983's 'Flashdance,' has died. She was 63.

The World Cup action in Qatar continued with Tunisia, Australia, Poland, Saudi Arabia, France, Denmark, Mexico, and Argentina all playing. CTVNews.ca takes a look at everything you need to know from Day 7 of the tournament.