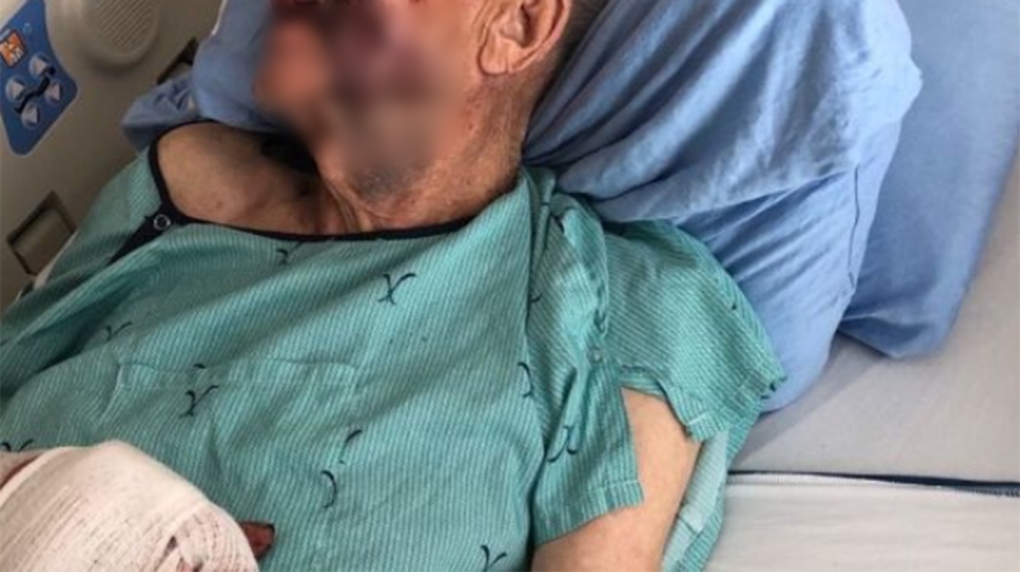 An 89-year-old Courtenay man was taken to hospital Wednesday morning after he was reportedly attacked by a man with a machete.

The victim told police he was inside his parked vehicle in the 400-block of 5th Street at approximately 4:15 a.m. when he was approached by a man on a bicycle who asked him for a cigarette.

The victim told the man that he did not have any cigarettes before the man allegedly assaulted him with what appeared to be a machete.

The Comox Valley RCMP are seeking witnesses and surveillance footage in the case.

The victim drove himself to the Comox Valley RCMP detachment to report the attack. He suffered multiple wounds to his face and was taken to hospital, according to police.

In a Facebook post, user Raymond Corbett posted pictures of the victim recovering in hospital. Corbett described the man as "the closest person I have to a grandfather," calling him "grampa Bob."

"My heart is broken thinking someone could do such a thing to another human person," Corbett wrote.

A GoFundMe page set up to aid the victim in his recovery had already received nearly $10,000 in donations Thursday morning.

The suspect is described as young, possibly in his 20s, with a dark complexion. The suspect was riding a bicycle and was reportedly wearing some kind of hat on his head.

“At this point in the investigation, the attack appears to be completely unprovoked,” said RCMP spokesperson Const. Monika Terragni Wednesday.

“Investigators have been scouring the area for evidence but we are looking for anyone who may have seen the suspect or for anyone with surveillance or dashcam footage during the early morning hours downtown,” she added.

Investigators from the Comox Valley RCMP major crime unit are gathering evidence in the area and will continue with the investigation.

Additionally, photos and video footage can be sent directly to the Comox Valley RCMP at comoxvalleyrcmp@rcmp-grc.gc.ca and an investigator will follow up.