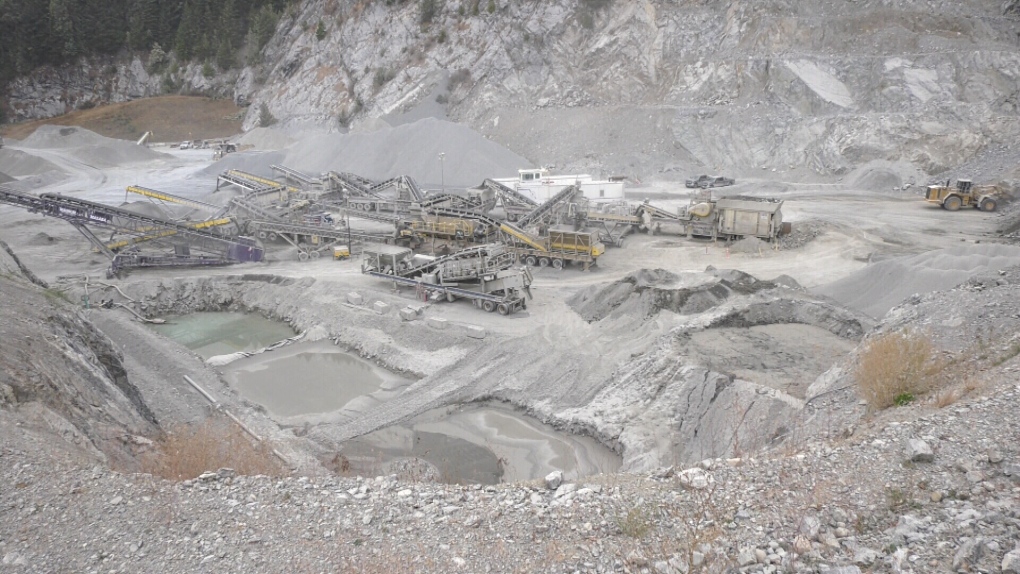 The nation is asking the province to expand the active mine site 30 per cent, from almost 40 hectares to just over 50. The proposed expansion would allow the realignment of the mine's boundaries to make the quarry more efficient for production in the future.

The Malahat Nation's chief administrative officer (CAO) says the majority of the mine's expansion would be inland and north of the current mine site and not towards the waters of the Saanich Inlet.

People opposed to the expansion say the scope of the expanded quarry is too large. There are also concerns that the logging that will take place to expose the mined rock will have a negative environmental impact on the Saanich Inlet.

“They’re going to do a lot of cutting to make room for this expansion,” said Brentwood Bay resident Ian Cameron. “It's a very large expansion, at the moment it's relatively small, but it's going to be a whole lot bigger. As near as we can see, it's going to take in the whole hillside.”

Cameron has lived on the shores of Brentwood Bay across the Saanich Inlet from the Bamberton quarry for many years. He says the latest proposal to expand the quarry is one of many since the former cement manufacturing facility was decommissioned.

“This is the fifth or sixth time that there has been a major expansion of what was the cement works proposed,” said Cameron. “In the past there has been a lot of objection and things have gone by the wayside.”

In an emailed statement to CTV News, the B.C. government said staff from the Ministry of Energy, Mines and Low Carbon Innovation "continue to engage with First Nations and the public about this application and are reviewing input received to date.”

“In terms of public awareness of the application, the ministry required the applicant to extend the advertisement period by including the Cowichan Valley Citizen to ensure a more comprehensive distribution to surrounding areas,” the government added.

The province has also extended the ongoing 30-day public comment period to Nov. 14.

”Primarily, we hope that the two or three ministries that are concerned with this carry out a really thorough review to make sure that there are not going to be any problems,” said Cameron. “The most important thing is that there has been very little information about how remediation is going to be carried out and what environmental protection there will be.”

“We want to make sure that if this is going to go ahead that it is not going to harm the inlet,” he said.

Handysides acknowledges there are a number of creeks that run into the Saanich Inlet on the Bamberton property, but none of them are through the existing or expanded quarry site.

“There’s been a lot of comments in the public about what the impacts of aggregate production are,” said Handysides. “We really want people to understand this isn’t a big mine, it’s a small mine that’s about producing rock for local markets, mostly home construction, and it's really about helping to ensure that there’s affordable product for the building community.”

He says the expansion of the foreshore wharves will allow the mine operator to accommodate larger barges when equipment is brought to or from the mine site a couple of times a year. He says there are safeguards in place should there be an accidental material spill into the waters of the Saanich Inlet.

“With the water lot, you have to have a spill protection plan that covers how materials are safely handled,” said Handysides. “It includes the aggregates, the cement powder that we handle now and any other materials and that there are contingency plans if any material were to go in the inlet.”

“The Malahat Nation thinks we’ll be successful with this permit,” said Handyside. “We’ve looked at what is a reasonable project on site and as the process has gone on we’ve reduced the footprint that we applied for to make sure it’s a project that fits the area.”

The statement from the province says “the application will be considered by an independent statutory decision maker within the ministry.”