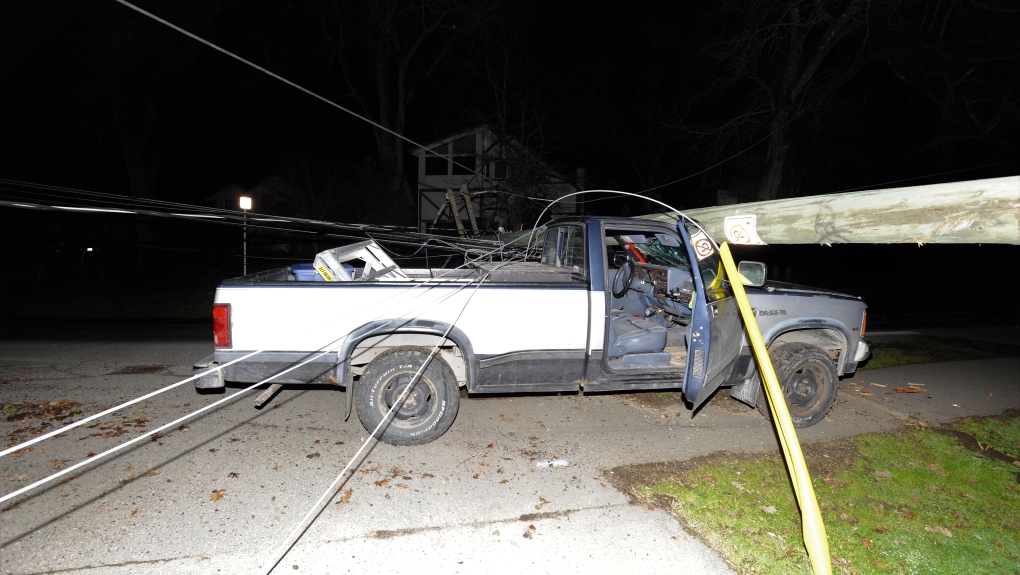 Saanich police say an alleged drunk driver is lucky to have escaped serious injury after they crashed into a hydro pole on Sunday afternoon.

Police were called to the collision around 4:20 p.m. Sunday in the 1000-block of Burnside Road West.

When officers arrived, the driver was found trapped in their vehicle with the utility pole collapsed overtop of the car.

Once the driver was freed, police say they failed a roadside breath test. The driver was handed a 90-day driving ban and had their vehicle impounded, according to Saanich police.

"In looking at the photos from the scene it is quite obvious to see that the driver was lucky to walk away without serious injuries," said Saanich police Const. Markus Anastasiades in a release Monday.

"Not only did the pole land on the windshield of the truck, but several of the lines attached to the pole were energized with thousands of volts of electricity," he said. "A clear message on the inherent dangers and risks of operating a motor vehicle while impaired."

BREAKING | Jason Kenney steps down after 51.4% approval in leadership review

Ed Fast is no longer the Conservative finance critic, interim party leader Candice Bergen says. Bergen said in a statement late Wednesday that Fast informed her he will be 'stepping away from his duties.'

Crown prosecutors want Ottawa protest organizer Tamara Lich sent back to jail to await trial, claiming she breached her bail conditions by agreeing to participate in an event next month where she will receive a 'Freedom Award.'

'Somebody out there is missing this child': Remains of young girl found in water in Dunnville, Ont.

Provincial police announced Wednesday the human remains found in the water in Dunnville, Ont., the day before are that of a young girl.

The Conservative Party of Canada is investigating a complaint lodged by Patrick Brown's leadership campaign about a racist email it says it received from a member.

Prince Charles and Camilla, Duchess of Cornwall, lit candles and listened to a prayer service on Wednesday inside a gilded Ukrainian Orthodox cathedral in Ottawa, while congregants and onlookers waved blue-and-yellow flags and Union Jacks outside.