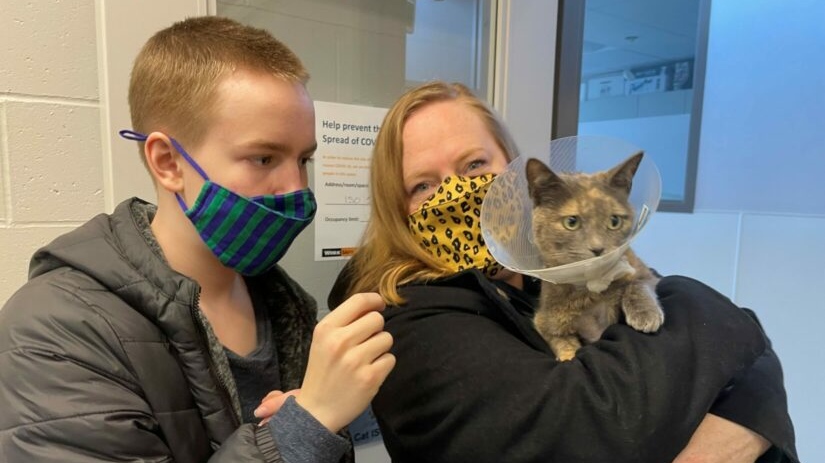 Megan and her son, Dean are pictured with their lost cat Miri, who went missing in Victoria and was found in Nanaimo. (BC SPCA)

A Victoria family was ecstatic to learn that their lost cat, Miri, had been found about two months after she had gone missing.

Adding to the surprise was that Miri was found more than 100 kilometres away from Victoria in the Mid-Island community of Nanaimo, B.C.

Miri's owner, referred to only as Megan by the BC SPCA in a release Tuesday, says it was unusual when Miri did not return home after she went missing.

"The day she went missing, we called her name over and over again, tried treats and searched the grounds but she was nowhere to be found," she told the SPCA.

"A large deer had visited the co-op grounds that day, so we aren’t sure if that spooked her," she said.

Miri's family put up posters and searched for their cat for months. Megan had almost given up hope before she received a fateful call.

"After we hadn’t heard anything for a couple of months, I remember thinking about putting away her food, but I thought no, not just yet and then I got a phone call from the Nanaimo BC SPCA," she said in the release.

The Nanaimo SPCA branch had received a "stray" cat, which was brought in by a Good Samaritan who saw that it was injured.

The SPCA says somehow Miri's collar had gotten around her head and one of her front legs, causing it to constrict and wound her.

After Miri was treated by veterinarians, she was scanned for a chip, and Megan's contact information appeared.

The excited pet owner took a day off work and drove up to Nanaimo with her son, Dean, as soon as she got the news about Miri.

"We were a little shocked when we first saw her, because she was so skinny," said Megan. "As soon as she saw us, she came right over." 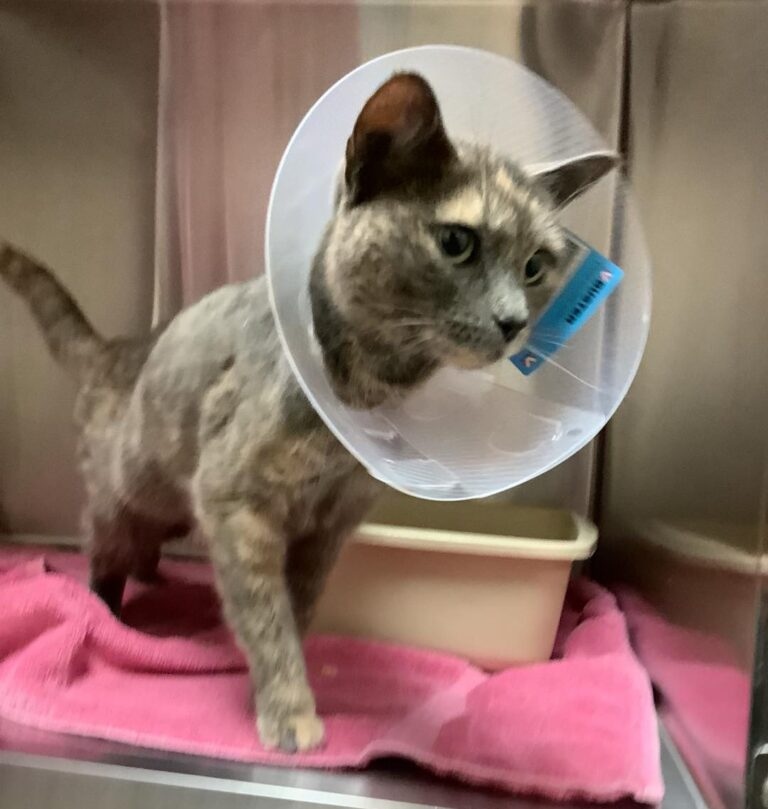 Miri the missing cat is pictured. (BC SPCA)

Once the trio made it home, Megan says Miri was "finally able to relax."

"When we got her home, all she wanted to do was snuggle, be on my lap and purr," she said.

'SPICIER THAN SHE USED TO BE'

No one knows how the three-and-a-half-year-old cat made it from Victoria to Nanaimo, but her family says the journey changed her.

"She is definitely a little spicier than she used to be," said Megan.

"She always loved to play attack, but she would never use her claws or teeth, just grab with soft paws," she said. "Now she smacks a little harder and will touch you with her teeth. She also purrs more often and louder now."

Megan adds that Miri is no longer intimidated by their dog, Frank.

The pet owner says she's grateful to the SPCA and the Good Samaritan that brought Miri to the SPCA.

The BC SPCA is encouraging pet owners to have some form of identification on their pet, such as a microchip. The chips can also be registered with the BC SPCA Pet Registry, which is accessible by all SPCA branches in the province, in case pets get lost.

Volunteers armed with smartphones are using a 3D-modelling app to preserve Ukraine's cultural heritage one snap at a time.