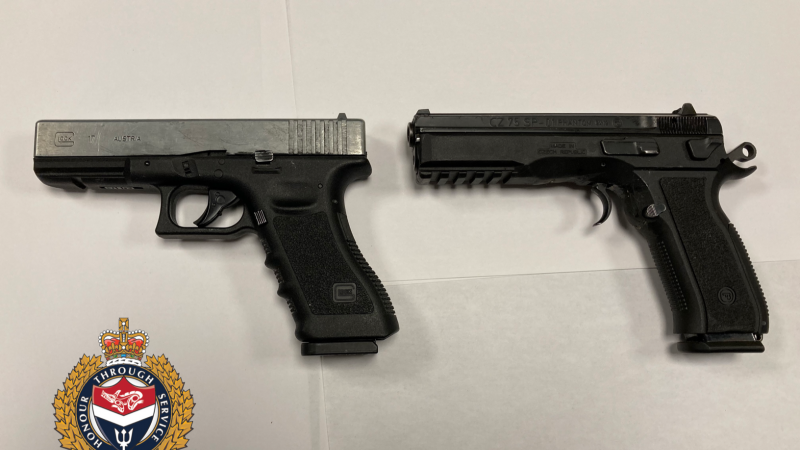 Police say a loaded handgun (right) and replica firearm (left) were seized during a traffic stop over the weekend: (Victoria Police)

VICTORIA -- Victoria police say two men were arrested over the weekend and a loaded gun was seized after officers spotted a vehicle being "driven erratically" in the Burnside area.

The vehicle was travelling in the 2900-block of Douglas Street just after midnight Sunday when police spotted it and decided to pull the car over.

During the traffic stop, police say an officer spotted a handgun on the floor of the car. The two occupants of the vehicle were then arrested.

During the arrest, police discovered that the handgun on the floor was a replica firearm. However, one of the men was found to be carrying a loaded 9mm handgun in a shoulder holster.

Police seized the pistol and replica, as well as fentanyl, methamphetamine and cocaine that were reportedly found inside the vehicle.

One of the men is now facing eight recommended charges, including possession of a firearm, charges related to drug trafficking and failing to abide by court-ordered conditions. The other man has since been released without charges as the investigation continues, according to police.