'Like a warzone': 1 sent to hospital after multiple crashes on snowy island highway

COURTENAY -- First responders are reminding drivers to slow down and drive for road conditions, especially when encountering accident scenes, after a multi-vehicle crash took place Thursday morning along the Inland Highway south of Buckley Bay.

Const. Monika Terragni of the Comox Valley RCMP says a frontline officer was assisting at an accident scene where a tow truck was dealing with a vehicle that had gone off the road when the situation quickly escalated.

“We were dealing with the first collision and we did actually have one motorist plow into the back of a police vehicle, so that police vehicle was damaged,” she said. “Luckily, there were no injuries. The officer wasn’t inside the car at the time that the collision occurred.”

Terragni says three subsequent accidents occurred at the same spot on Thursday, including a commercial vehicle that ended up on its side. She says speed and road conditions were a factor.

“Out on the highway like that, people are driving very fast and we were extremely lucky that nobody was seriously injured,” she said. “We did have at least one person get transported to hospital but it could have been much worse.” 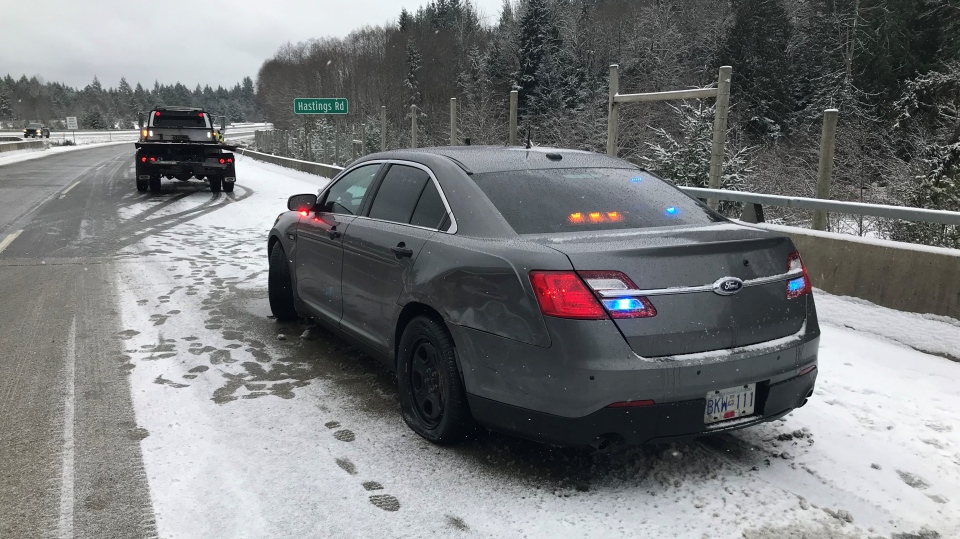 One tow operator said the speed of the subsequent crashes and the number of vehicles involved made it “seem like a warzone.”

Dunn Right Towing operator Corey Christiansen was working on that first accident when he witnessed the others unfolding around him.

“We had a semi-truck hit the police car. Luckily, he stopped to talk to the police officer – and (we) had another passenger vehicle slide out of control over the bridge and almost hit a pedestrian,” said Christiansen.

He then saw another crash unfold across the highway.

“There was a passenger vehicle slowing down on the outside, on the other side of the highway, when a large truck was going way too fast and unfortunately hit her rear-end and went into the inside median. (It) hit the barrier and lost its axle and flipped onto its side,” said Christiansen.

Members of the Deep Bay Fire Department were called to the scene shortly after 10 a.m. and found the commercial vehicle on its side.

The driver of the truck was still inside the cab of his rig after the crash.

“The driver of the truck couldn’t get out. It was laying on its side so we basically assisted to get him up and out of the vehicle,” said Lenz. “There didn’t seem to be any major injuries, most of the patients were in the care of Emergency Health Services when I arrived on scene.”

The investigation into the crashes is continuing and Terragni says charges may be laid.

“At this point, because there were so many motor vehicle collisions in the same area, it’s going to take police officers a little while to piece everything together and to sort out who’s who and exactly what happened,” she said.