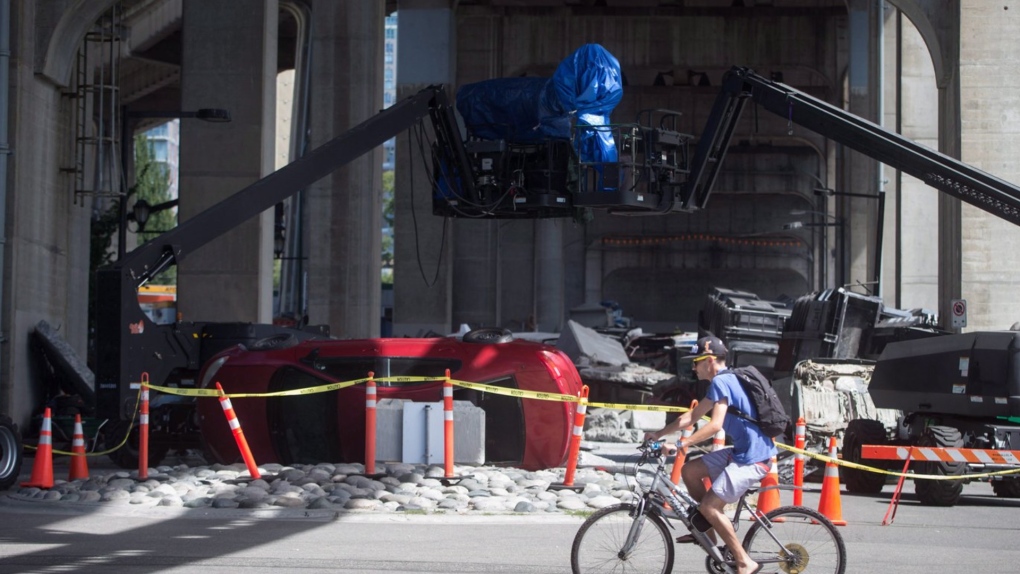 A cyclist rides past a film set for the movie "Deadpool 2" in Vancouver, B.C., Tuesday, Aug. 15, 2017. A 15-month dispute in British Columbia's film and television industry has ended with the ratification of a new contract for creative and logistical people working on productions shot in the province. THE CANADIAN PRESS/Darryl Dyck
Vancouver -

A 15-month dispute in British Columbia's film and television industry has ended with the ratification of a new contract for creative and logistical staff working on productions shot in the province.

The Directors Guild of Canada BC District Council says in a statement the new contract was supported by 89.5 per cent of the members who voted on the deal.

The guild contract is with the Alliance of Motion Picture and Television Producers and the Canadian Media Producers Association-BC.

Kendrie Upton, B.C. council executive director, says the contract means the province's film and TV industry is open for business and a busy summer of filming ahead can begin.

Among some of the new contract details provided by the guild are: annual wage increases of three per cent retroactive to 2021, provisions for increases in B.C.'s minimum wage and recognition of National Truth and Reconciliation Day as a statutory holiday.

This report by The Canadian Press was first published June 25, 2022.

A man has pleaded guilty to uttering a threat against Prime Minister Justin Trudeau during a campaign stop in Cambridge last year.