A Nanaimo, B.C., couple has quite the story to tell after a mother bear and two cubs broke into their home and raided their kitchen last week.

A home surveillance camera recorded the bears entering the home along Meadow Drive through a pet door in the early hours of Friday morning, around 3:45 a.m.

Michael Kellam tells CTV News that he and his wife woke up to the sound of their dog, Mollie, barking wildly in a way that they had never heard before.

Jacqueline was about a metre into the hallway when Michael heard his wife say "bear."

"I have an image of that bear seared into my memory as she looked back at us in the light spilling out from the bedroom lights, which Jacqueline had flicked on," he told CTV News on Tuesday.

The couple quickly ran back to their bedroom, shut the door and called 911.

The bears devoured nearly all of the apples and oranges kept inside the kitchen, and nibbled on some of the pet food meant for the couple's dog and two cats. 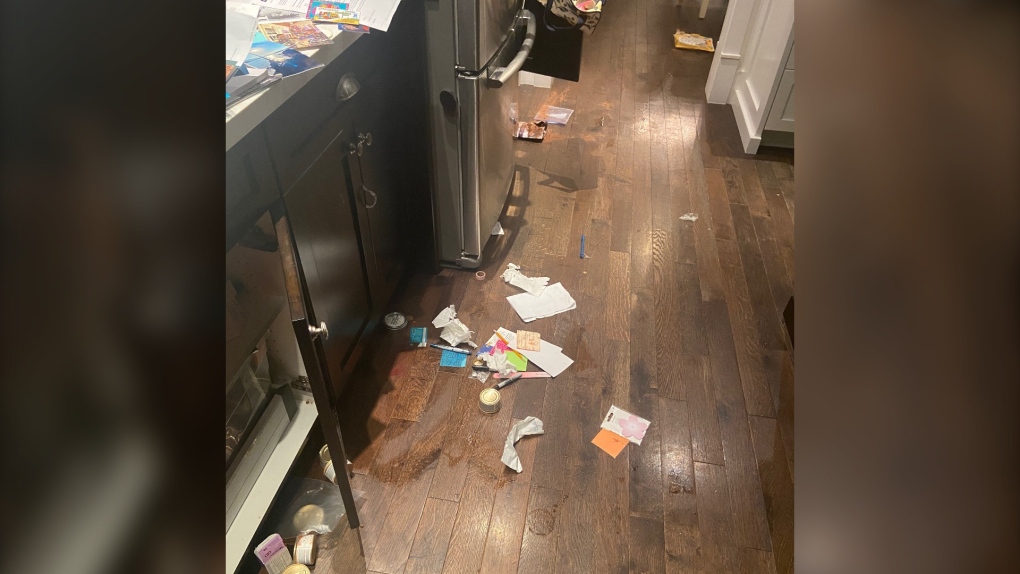 Homeowner Michael Kellam says the house was in worse shape directly after the feast, and that these photos were taken after a bit of cleanup had already taken place. (Michael Kellam)Michael says the bears also got into a bottle of caramel syrup which had fallen on its side and leaked all over the kitchen floor.

"They licked up quite a bit but then walked through the puddle and left syrup paw prints about the kitchen and back hall," he said.

While the house was left in a mess, Michael says there was very little damage done to the home, except for the pet door that the bears had come in through.

The homeowner says the bears had broken the pet door open to fit inside.

"Miraculously, the cupboard doors aren't scratched or damaged," said Michael. "Not sure how they managed to open everything so carefully but my wife says they were quite polite."

While waiting inside his bedroom for police to arrive, Michael thought it would be best to get the bears to leave the house if possible.

He began searching the home cautiously while clapping his hands and banging against the wall to alert the bears of his position, while also yelling at the mother bear to "find its own home."

As he approached the kitchen he heard some noise coming from another hallway and retreated back to his bedroom. After several minutes, he began the search again, this time hearing nothing in the house.

He approached his kitchen expecting the door to be open, assuming that the bears got inside because someone had forgotten to lock the door.

However, he found that the pet door had been burst open, with food strewn about the kitchen. 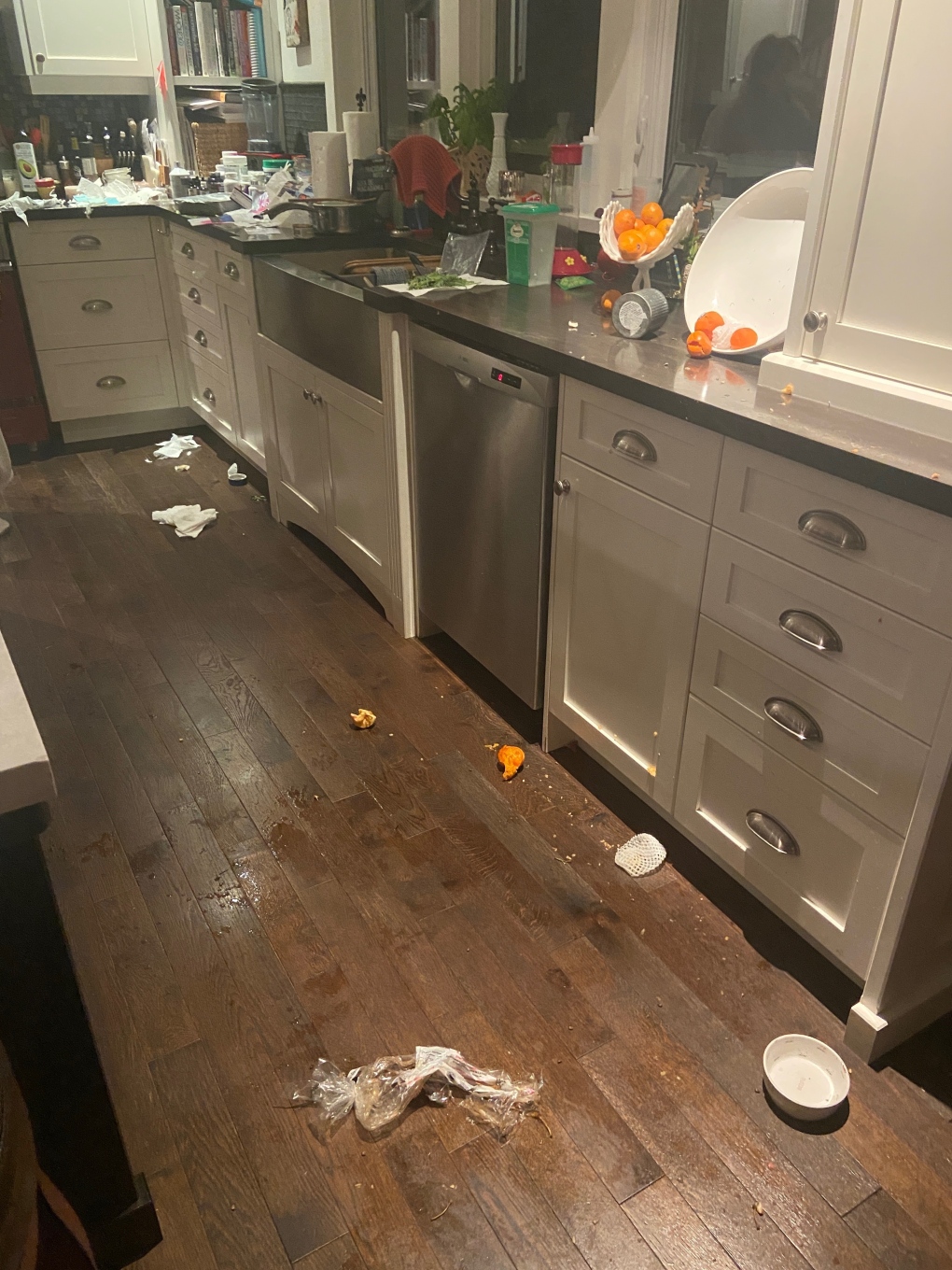 Homeowner Michael Kellam says the house was in worse shape directly after the feast, and that these photos were taken after a bit of cleanup had already taken place. (Michael Kellam)Shortly after, a police officer arrived carrying a large rifle. He searched the home and confirmed there were no animals inside and informed Michael that he thought he had heard some noise coming from a slope beside the house.

The bears weren't found that night and conservation officers were alerted of the incident.

CONSERVATION OFFICERS ON THE CASE

One day later, the bears returned and were spotted meandering about the Kellams' yard.

The BC Conservation Officers Service says it has set up traps in the area, and that the bears have also broken into several cars in the neighbourhood. 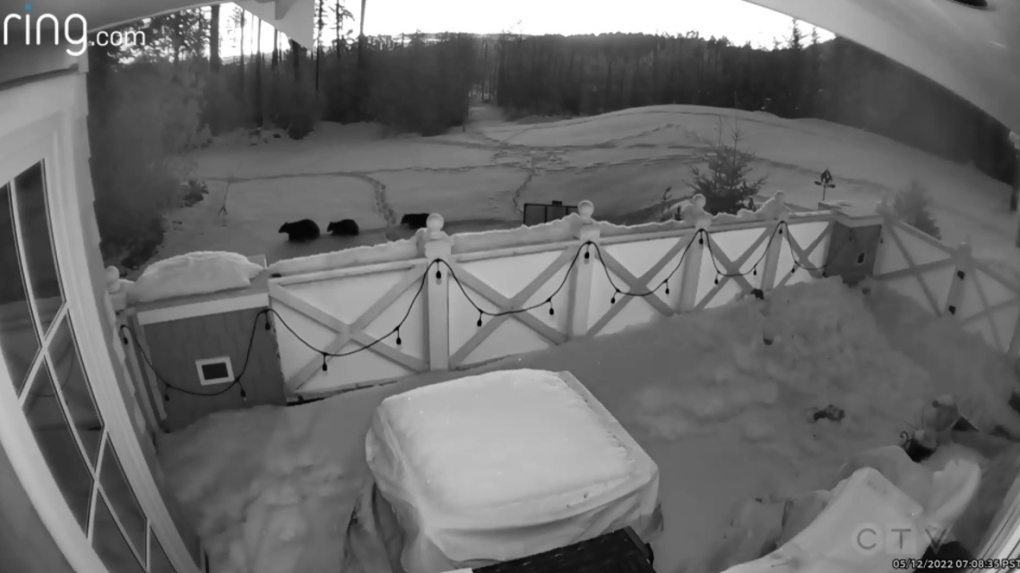 The bears are pictured at the Kellam house just north of Nanaimo, B.C. (Michael Kellam)

"I will say, everyone has been excellent from the police dispatcher, the responding officer and the conservation officer that we've had the most interaction with," said Michael.

The BCCOS is encouraging everyone to lock up all animal attractants for the time being, such as garbage, pet food and bird seed.

"Bears that enter occupied homes and obtain food rewards are an extreme public safety risk," said the BCCOS in a statement.

For now, the Kellams have boarded up the broken pet door and are looking to buy a new door that doesn't include a pet door at all. 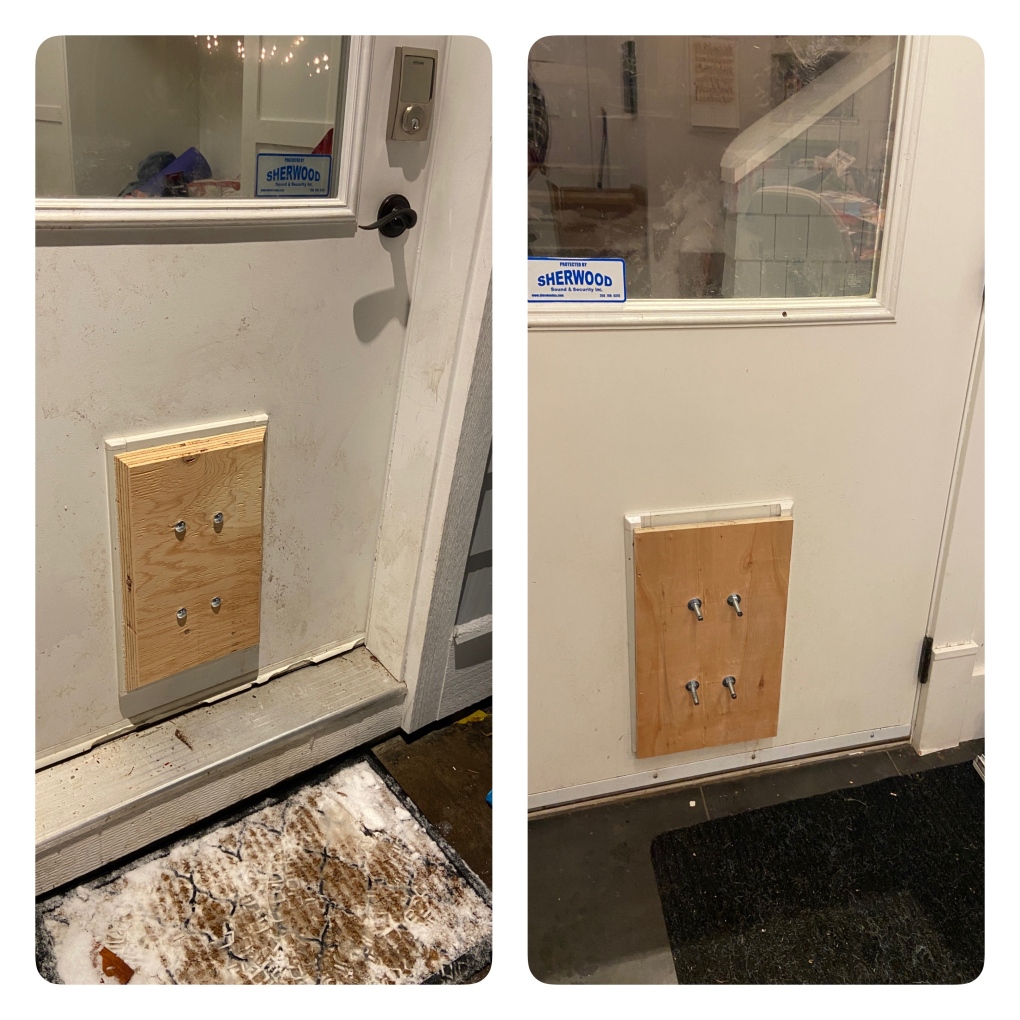 The now-boarded up pet door is shown. (Michael Kellam)

Two children are dead and six others are injured after a Laval city bus crashed into a daycare Wednesday morning. The driver of the bus, a 51-year-old man, has been arrested and faces charges of homicide and dangerous driving, police say.

NEW | 'There are no words': Laval daycare bus crash prompts outpouring of condolences on Parliament Hill

Condolences are pouring in on Parliament Hill after a Laval, Que., city bus crashed into a daycare on Wednesday morning, with federal politicians of all stripes expressing their sympathies with the families affected and gratitude to the first responders.

The Bank of Canada released a summary of its Governing Council meetings on Wednesday, providing the public and financial institutions with more insight into the central bank’s decision to raise its key interest rate on Jan. 25.

Health-care workers have new hand-washing guidelines. Here's how you can apply them

The way respiratory viruses have circulated this fall and winter, most Canadians could probably benefit from a hand-hygiene refresher. Here are the latest hand-washing best practices to apply in your daily life.

Killer whale mothers take care of their sons much longer than their daughters. This could be why

The sacrifices female killer whales make for their sons well after they are weaned is negatively affecting their reproductive health, according to new scientific research.

With hope of finding survivors fading, stretched rescue teams in Turkiye and Syria searched Wednesday for signs of life in the rubble of thousands of buildings toppled by the world's deadliest earthquake in more than a decade. The confirmed death toll approached 12,000.