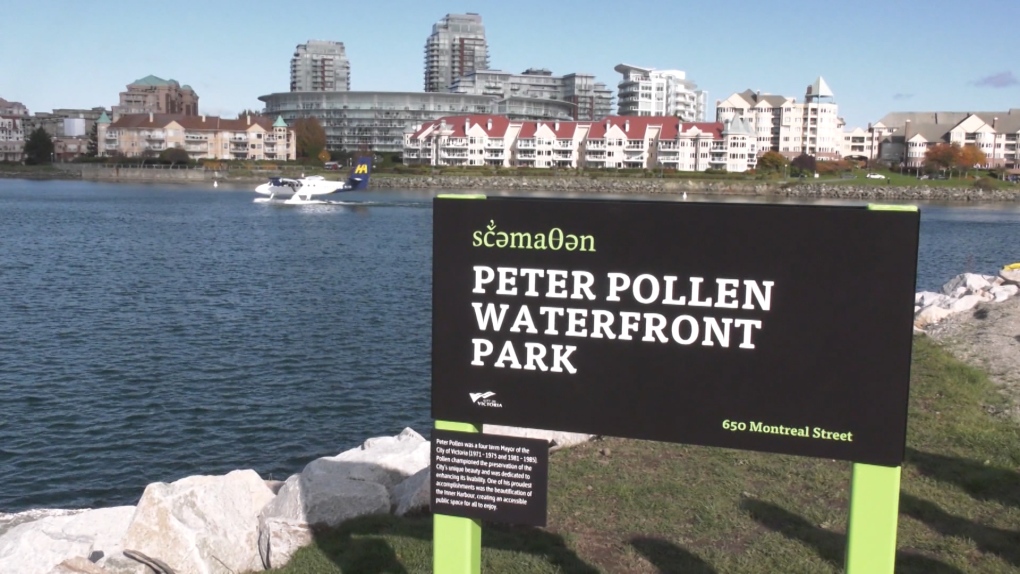 A waterfront park in downtown Victoria has been renamed in honour of former mayor Peter Pollen. (CTV)

VANCOUVER - A waterfront park in downtown Victoria has been renamed in honour of a former mayor.

At a ceremony Saturday, Laurel Point Park on the city's Inner Harbour officially became Peter Pollen Waterfront Park. Signs in the park also now display the area's name in the Lekwungen language, which is spoken by the Songhees and Esquimalt First Nations.

"It's a way to do reconciliation and honour a former mayor at the same time," said Mayor Lisa Helps at Saturday's event.

The area was first established as a city park in 1975, during Pollen's first stint as mayor. The park site had previously been home to a paint company.

"We're very thrilled," said Mary Ann Pollen, the former mayor's widow, of the renaming. "It's a beautiful spot in Victoria and the extended park land here is quite amazing."

Helps said Pollen was instrumental in shaping the development of Victoria's waterfront. He prioritized waterfront access for the public and was an advocate for a "human-scale city," she said.

"A lot of the way the city looks and feels today is due to Peter Pollen and the work he did when he was mayor," Helps said. "I can picture families down here picnicking on the waterfront and I think that fits with what Peter would have wanted as well."

The three-acre park is not yet finished, and the city is asking the public for input on how the park should be designed in the future.

More information about the project and opportunities for public comment can be found on the city's website.