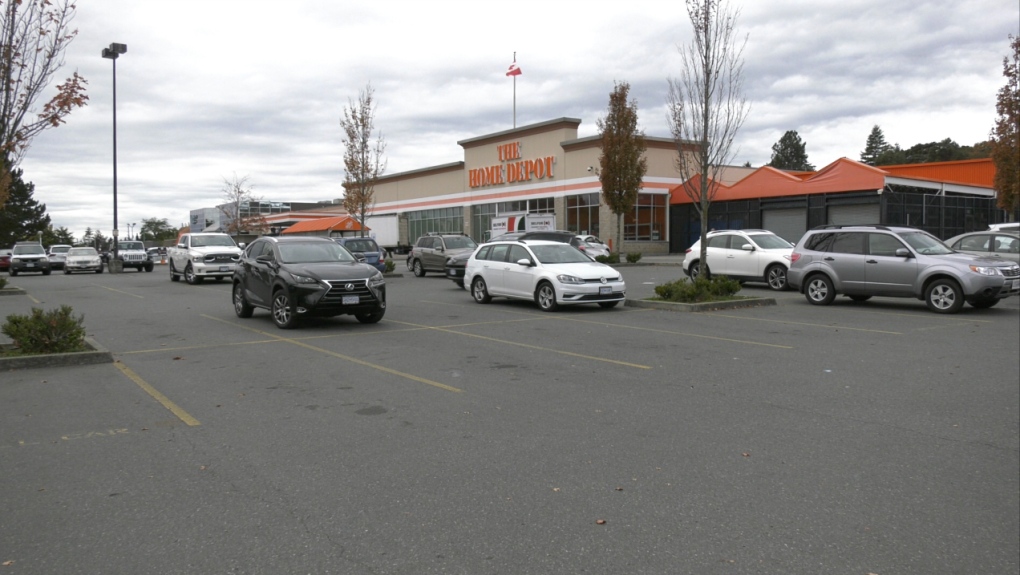 Redevelopment plans for the University Heights shopping centre have been thrown into question after last-minute demands came in from property tenant Home Depot: (CTV News)

VICTORIA -- A Vancouver-based developer has hit the “pause-button” on plans to redevelop University Heights Mall in Saanich after being hit with demands from its U.S.-based tenant, Home Depot.

The last minute requests from the building supply giant include a 10,000-square-foot expansion for the University Heights store, $5 million in compensation and strict compliance with a provision in its lease that restricts construction of buildings on the common parking area.

“I think we’ve always been hopeful that we would sort these differences out, and unfortunately we haven’t to date,” said Wesbild president and CEO Kevin Layden. “We’ve had to pause [the redevelopment] before we get to public hearing.”

Vancouver-based Wesbild Holdings Ltd. has been in the planning phase of a $230-million redevelopment of the 1980’s era mall for the past three years. The company was in the final stages of the approval process with the District of Saanich when it was made aware of the “last minute” requests by the U.S.-based retailer.

“There was a massive amount of work over a number of years as this project moved forward to its final version,” said Saanich Mayor Fred Haynes. “Then, out of the blue, they get this last-minute demand from Home Depot for what are really unacceptable and financially impossible conditions.”

The redevelopment of the mall site, located at the corner of Shelbourne Street and McKenzie Avenue in the Gordon Head neighbourhood, would have seen the construction of 598 rental housing units, an 11,000-square-foot daycare, a BC Transit hub and new commercial space.

The mixed commercial-residential project had recently received first and second reading at Saanich Council and was expected to proceed to public hearing in the coming weeks.

Layden says the requests from Home Depot bring the financial viability of the current development plan into question.

“Its not like it is a condo project, 28-storeys, where there is a lot of elasticity in the financials. It’s limited in what we can and can not do,” said Layden. “So we have a breaking point that we are passed and we can’t figure it out.”

Layden says Wesbild Holdings Ltd. is still in negotiations with Home Depot’s headquarters in Atlanta, Georgia. He hopes the two parties can reach an agreement that will see the project proceed in its current form.

Layden says he expects to be back in discussions with Home Depot in the coming weeks.

“I think its clear we want to move forward with the project and we’re hopeful that we are able to do that,” said Layden. “We can’t keep going down this path without Home Depot’s consent – now what it takes to get that consent is what we are working on.”

Layden says if the redevelopment of the University Heights Mall site is able to continue, it will bring much needed rental units to the region and a host of amenities to the Gordon Head neighbourhood.