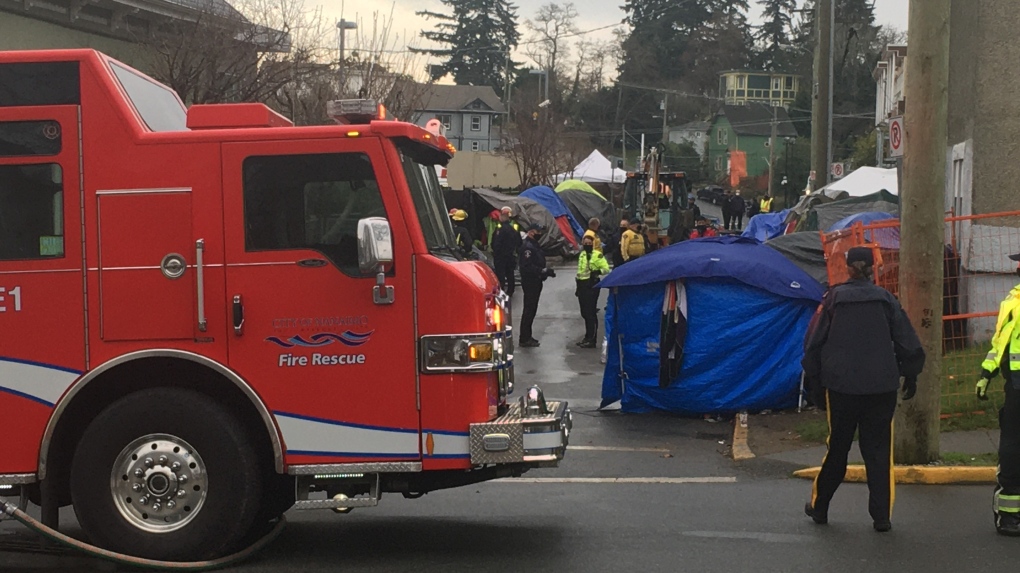 Emergency crews remained on scene and the block was closed to traffic at 1:30 p.m. (CTV News)

VICTORIA -- Emergency responders rushed to the scene of a large fire at a Nanaimo homeless camp Thursday.

The fire broke out at the Wesley Street encampment in the city’s downtown core around 12:15 p.m.

Nanaimo deputy fire chief Tim Doyle says the fire "triggered a number of explosions of propane tanks" in the area.

Multiple tents caught fire in the blaze and nearby offices were temporarily evacuated.

Emergency crews remained on scene and the block was closed to traffic at 1:30 p.m. A backhoe was also on scene removing debris.

No injuries have been reported at this time.

The site has been cleared of campers and remains closed to public access.

Campers have been living at the site for several months.

In October, city bylaw officers visited the encampment to enforce a fire safety order after concerns arose about combustible materials and tents that were not adequately spread out.

Local RCMP were allowing residents of the encampment back into the site around 2:30 p.m. to gather their belongings and then leave while the fire investigation continues.

"The city is in contact with our provincial partners, who have mobilized to the site to support impacted residents," the deputy chief said.