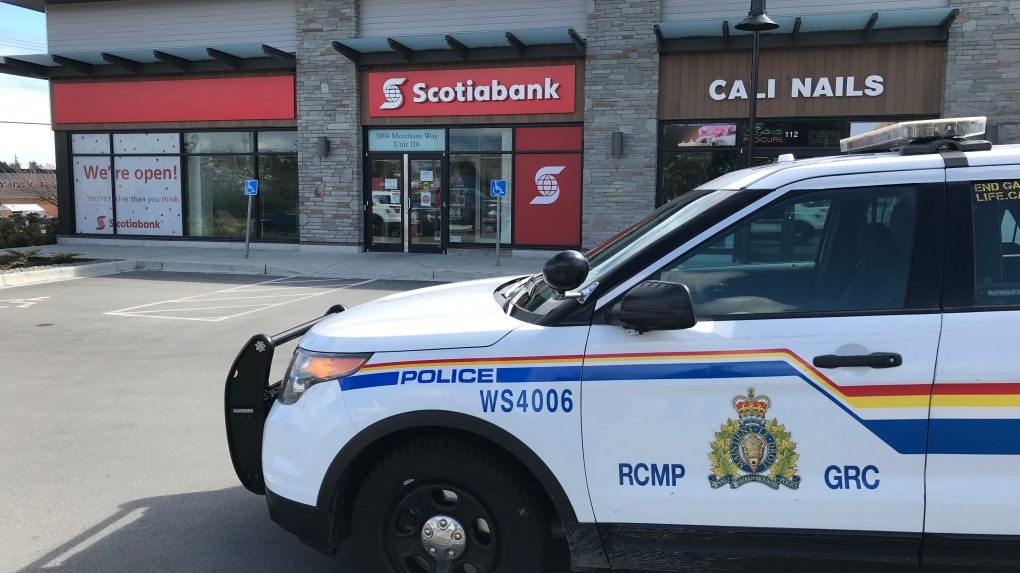 Officers are on scene at the Scotiabank at the Westshore Town Centre on April 2, 2020. (CTV News)

VICTORIA -- Mounties are urging the public to stay away from the Westshore Town Centre in Langford after a man robbed a bank at gunpoint Thursday afternoon.

An eyewitness tells CTV News he was inside the Scotiabank at the mall when a man dressed all in black and wearing a dust mask over his face walked up to a bank teller, pointed a handgun and demanded cash.

"There was three other guys at the tellers so we were right beside him," said witness Tanner Hayward, who called 911 immediately after the incident.

"He yelled, 'Empty the register! Give me all the [expletive] money you have!'"

The teller handed over an unknown quantity of cash, which the man stuffed into a backpack before fleeing on foot, Hayward said.

The witness told CTV News he watched the robber leave the bank and then run up Kelly Road alone.

The West Shore RCMP sent out an advisory at 2:37 p.m. asking all residents to avoid the area near Jacklin Road and Kelly Road.

Several police cars filled the mall parking lot before 3 p.m. while other units were seen patrolling nearby streets.

Police say no injuries were reported in the incident.