CAMPBELL RIVER -- What's being described as a natural glacial slide has resulted in widespread flooding and navigational problems that could last for months in the Bute Inlet area of coastal British Columbia.

"This looks literally like a bomb went off," says Quest Water Taxi owner Leigh Nelson. "We have everything from sawdust to bark to sticks to pieces of trees. All the parts and pieces are there, they're just not their in full tree form anymore."

Nelson was heading to Toba Inlet on Sunday and had to divert to Bute Inlet when he came across massive debris fields affecting local waters.

"It was about a quarter-mile wide and it was spread right from one shoreline to the other," he says. "We couldn't even find a six-inch hole in that stuff to get through."

Nelson calculates he's seen three or four smaller slides along coastal waters in the past decade but nothing like the devastation in the region in the past week to 10 days.

"There's talk now that this is possibly the biggest slide that we've had in B.C. in quite a number of years," he says.

Helicopter pilot Bastian Fleury has seen the devastation as well. After hearing reports of widespread flooding and islands of debris in the inlet, he flew over the region and was shocked by what he saw. 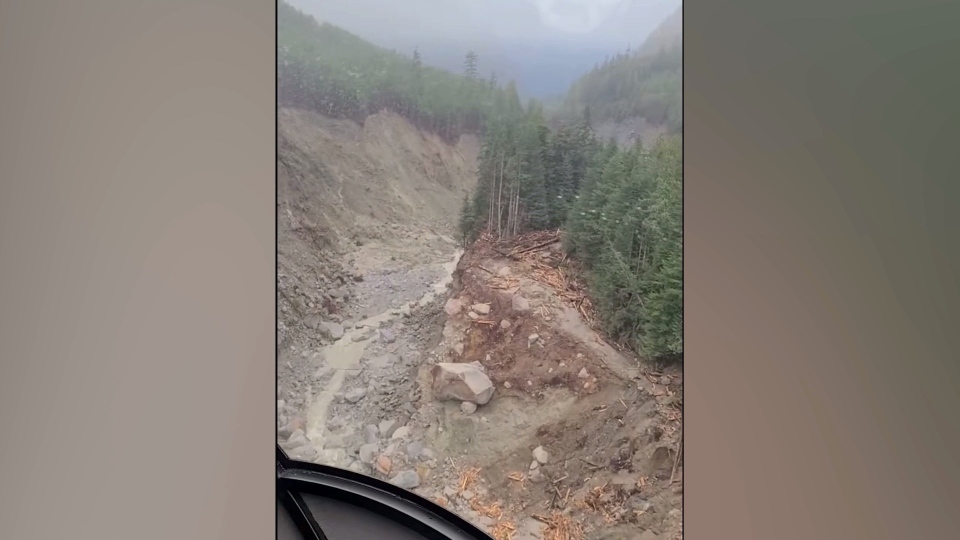 "It was just so much wood -- never seen that much wood -- and then the closer we got from the Southgate River, the more wood and then we saw that big landslide" Fleury says.

He says a portion of the Homathko Icefield broke off and triggered a large, destructive wave.

"We started to fly up the landslide and then we got to the glacier [and] we saw that a big chunk of ice basically came down and went in the lake" he says.

Fleury says it will take time before government agencies can get into the area to fully assess the damage.

"It's a very remote area. It's about 45 minutes flight from Campbell River so it's not just next door," he says.

Nelson says the effects will be felt by mariners for months to come.

"I would caution any mariner, commercial or pleasure, for at least the next six to 12 months: use extreme caution north of Campbell River and into the Discovery Islands and the mainland inlets," he says "There's a lot of wood in there."

The debris is moving and will eventually reach Johnstone Strait, Quadra Island, Port Hardy and even Nanaimo, Victoria and Vancouver, according to Nelson.

"It's on the move," he says. "It's going to be going this way, that way, every single day as the tides rise and fall in Bute Inlet."

He says he has heard that several fish spawning beds have been destroyed and other wildlife has been affected.

"I would venture a guess we're looking a few hundred acres of prime grizzly bear habitat that's been destroyed in that area," he says.