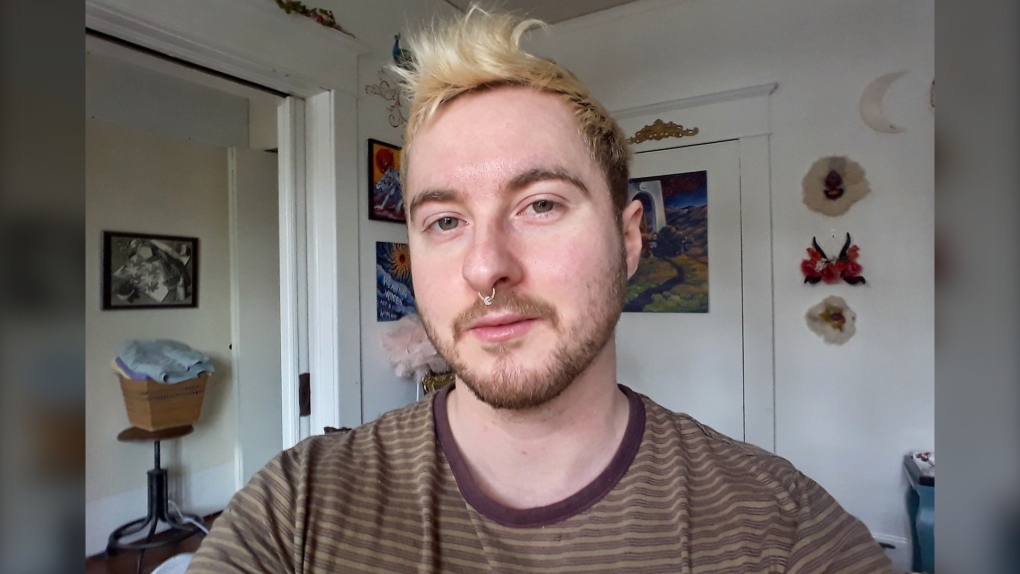 Rory Higgs poses in this undated handout photo. Rory Higgs was involuntarily detained in a psychiatric facility in B.C., multiple times and says the only province where patients don't have the right to refuse treatment should change its laws to protect vulnerable people and align with the rest of Canada. THE CANADIAN PRESS/HO, Rory Higgs

VANCOUVER -- A peer-support worker who helps youth with mental health challenges says being involuntarily detained in a psychiatric facility half a dozen times has given him insight into the lack of legal protections for vulnerable patients in British Columbia.

Rory Higgs said he first sought treatment in hospital at age 18 during a difficult time in his life, but did not know he could be kept there, medicated against his will and placed in a seclusion room.

“It was a very jarring experience. I was not really told what was going on. And I was freaking out quite a lot because it was a shock to me,” he said, adding a second psychiatrist reassessed and discharged him the following day.

B.C. is the only province where the Mental Health Act allows for so-called deemed consent to treatment.

The legislation states that anyone with involuntary status under the law is presumed to have agreed to psychiatric treatment. Family members and other advocates are also barred from challenging prescribed treatments.

Higgs, now 25, is among advocates for the mentally ill who say the law must be changed for patients who need more support in the community.

After his first detention, Higgs was held at a psychiatric facility about five more times over the next three years with a diagnoses of psychosis.

Higgs said he was never formally advised that he could apply for a review of his detention and only learned more about his right to a hearing toward the end of his hospitalizations. He felt powerless to argue against involuntary detention, even with the help of an advocate through a legal aid program for patients, he added.

A major challenge of the system is that reviews are not mandatory, Higgs said.

Unlike in Ontario, B.C. has no independent advisory agency that informs patients of their right to a lawyer.

Patients at B.C. facilities are entitled to a hearing within 14 days of their request.

But the Mental Health Review Board, which conducts the hearings, said in a recent report that it is “concerned” about the number of applications that do not proceed to a hearing.

The report found that only 37 per cent of patients who applied for a hearing had one. It said 54 per cent of scheduled proceedings did not go ahead because the patient withdrew their application, sometimes when they were discharged from hospital and placed on so-called extended leave in the community where they are connected to a mental health team.

“The number of withdrawals may or may not raise an access to justice issue,” the report said.

About a third of hearings did not proceed because patients were decertified after they requested a hearing.

Lisa Wong, a lawyer who sits on review board panels, said a lack of funding for legal representation through the provincially funded Mental Health Law Program is a big issue for patients who sometimes show up at hearings without an attorney.

Patients who are on extended leave in the community can also apply for a hearing, but lawyers may not be able to reach those who are living in a single-room occupancy hotel, for example, where phone messages are not always be relayed or received, she said.

Wong said applications are withdrawn in nearly half the cases when lawyers said they did not get instructions from patients, which could also mean there was no contact with the applicant. She noted no reasons have to be provided due to lawyer-client privilege.

Mental health laws across Canada allow people to be detained if they are a danger to themselves or others.

Marina Morrow, a professor at the school of health policy and management at York University in Toronto, said B.C.'s laws are “uniquely problematic” because psychiatric treatment becomes compulsory but there is no oversight of the law, which is considered discriminatory against those with a disability and no mechanism for automatic review.

However, mental health systems across the country are “crisis driven” because psychiatry and acute care are funded while many other mental health supports are not, so ending up in the emergency department before being detained becomes a route to accessing care in the community for many patients, Morrow said.

“It makes sense to me that a psychiatrist will say 'Go to emergency and maybe you'll get some help that way.' ” she said, adding patients in B.C. could be forcibly administered medications and electroconvulsive therapy.

“There's been frustration in B.C. for many, many years, with people raising concerns about the act and really little governmental response.”

Jay Chalke, the ombudsperson in British Columbia, said in March 2019 that a month-long audit of all provincial psychiatric facilities revealed a rights-advice form that patients should have signed was not found in 51 per cent of files.

Chalke's recommendations were accepted by the ministries of Health, Mental Health and Addictions as well as the Attorney General though Chalke, who is expected to issue a followup report in the spring, said some promised timelines for action had passed.

The ministries of Health and Mental Health and Addictions did not respond to requests for comment on whether they would consider dropping the deemed-consent aspect of the Mental Health Act.

The Health Ministry issued a statement saying it established standards last month to support compliance involving the completion of forms as well as auditing requirements to be reported on a quarterly basis.

The Attorney General's Ministry, which committed in January 2019 to providing a mandate for an independent rights body by November of that year, said such an agency requires “research and consultation with many groups who may be impacted by the delivery of the service.”

The ministry says it has begun consultations including with experts and other provinces.

In 2016, the Council of Canadians with Disabilities and two patients who had involuntary treatment challenged the deemed-consent aspect of the Mental Health Act in B.C. Supreme Court, arguing their constitutional rights were violated under the Charter of Rights and Freedoms.

The B.C. government stopped the case from going to trial, saying the council did not have public standing as a non-profit society. The province is now asking the Supreme Court of Canada to hear the case after the B.C. Court of Appeal issued a decision on standing.

Laura Johnston, legal director of Health Justice, said the underlying issue is that the law does not promote the dignity of patients, who are often injected with medication and placed in restraints as well as solitary confinement.

“People with mental disabilities, including mental illnesses, end up having negative experiences when they interact with our health-care system, sometimes even traumatic experiences,” she said.

She said that prevents them from accessing care or social services in the future.

This report by The Canadian Press was first published Feb. 7, 2021.