'It was really a teaching tool': Porpoise skull stolen from Sidney aquarium 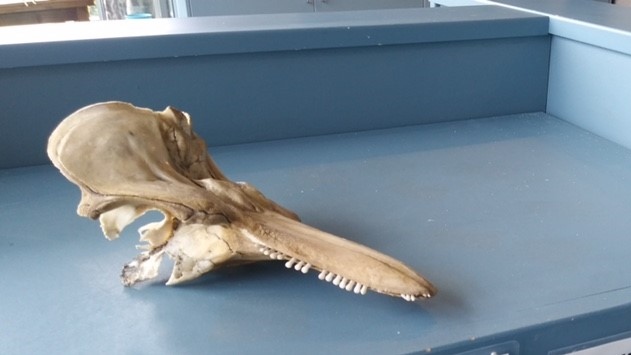 The missing porpoise skull is pictured: (Shaw Centre for the Salish Sea)

VICTORIA -- The Shaw Centre for the Salish Sea is looking for the public’s help in recovering an important artifact that was taken from its collection.

Cleaning staff at the Sidney aquarium noticed a porpoise skull was missing on the morning of Jan. 9, 2021. Staff say they believe it was taken sometime in the afternoon of Jan. 8.

“To look at it you’d think, 'Oh it’s battered, it’s been broken, there’s teeth missing and it looks a little sad,'” said Shaw Centre for the Salish Sea director of learning and communications Tina Kelly. “The fact is, it was really important to us for teaching visitors as well as countless students who have come through the doors since we opened 12 years ago.”

Kelly says the porpoise skull was acquired more than a decade ago when the centre took ownership of other skulls and skeletons from a peninsula museum that closed.

She says the aquarium has no exact record of where the porpoise lived, but the skull was found in 1996 in the waters off southern Vancouver Island.

“The porpoise skull was a really loved artifact here at the centre, and I say it was an artifact but it was really a teaching tool,” said Kelly. “We would teach the difference between porpoise and dolphins because they look very similar, but there are differences between the two animals, like the teeth.”

Kelly says porpoises are a big part of the Salish Sea and most aquarium guests already know about them. However, they generally don’t know much about their bones and skulls.

She says the waters around the region are home to two species of porpoise, the Dall’s porpoise and the Harbour porpoise. Having the skull in the aquarium’s collection was an important educational tool when teaching the differences between the two sea animals.

“This has happened so recently, so we haven’t given a lot of thought into how we will adapt to giving those messages around the porpoise skull just yet,” said Kelly. “Although we are sad about the loss, we aren’t going to let it deter us, we’re going to find ways to work around it and we are going to move forward.”

Staff at the centre ask that anyone with information on the stolen porpoise skull contact the aquarium. For more information, go to the Shaw Centre for the Salish Sea website.