'It was an explosion': Suspicious fire rips through Parksville resort

Two people were taken to hospital Thursday after a suspicious fire tore through a cabin at the River Green Resort in Parksville.

Two Parksville fire crews were called to the resort after reports of a fire and explosions around 9:30 p.m.

They arrived to find one cabin fully involved but were able to quickly contain the blaze. Two people inside the cabin were taken to hospital.

Assistant Chief Steven Liedl of the Parksville Volunteer Fire Department said trees and vehicles were also damaged in the blaze.

He confirmed that one patient suffered serious burns while the other was taken to hospital as a precaution.

Rescuers from Errington, Coombs, Qualicum and the BC Ambulance Service assisted in the operation.

"There was a considerable amount of flame," Liedl said, adding that recent rains likely helped control the inferno.

An investigation into the cause of the blaze is ongoing and investigators say it appears to be suspicious.

Neighbour Grant Gibson said he heard a loud bang and saw a flash of light before looking outside and seeing the cabin ablaze.

"By the time we got out we could really see the fire was burning and within 10 minutes it was completely engulfed in flames," Gibson said. "Some people were running from the place."

"I thought it was a thunderclap but it didn't sound quite right – and it wasn't," Nelson said. "Everybody came running out from the trailers around us.

"It was an explosion," he said. "There's nothing else that could make a noise like that."

Corey Shaw was also staying nearby and says he ran into the burning unit and helped a woman escape after one man had already exited the cabin.

"The fellow that I saw had been burned really bad. He was in very heavy shock," Shaw said. "The girl walked away from the fire with myself, in her housecoat. She appeared to be just in shock. She wasn't burned," he said.

"I'm shook up. I worked in the oilfield and was trained for stuff like that. It's just not something you ever thought that you'd ever have to use. I'm shook up." 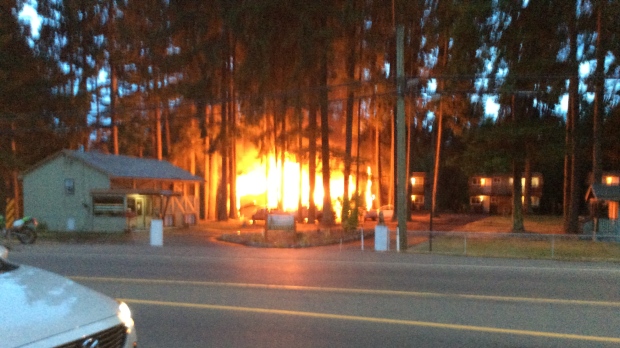