'It's very disturbing': Expert says sea stars melting away because of wasting disease 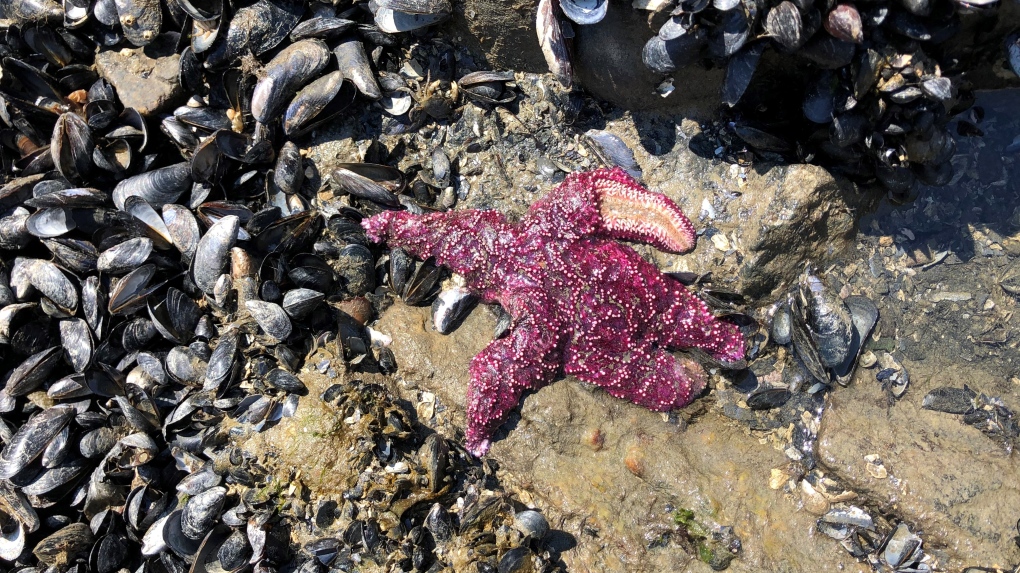 Sea stars have been wasting away since 2013 and studies have shown this could be due to bacteria or a virus that thrives in warm waters. (Chris Harley)
Victoria -

Sea stars in the waters off British Columbia that died off in the billions about a decade ago are not recovering as expected, an expert says.

A new study published by the Royal Society said sea stars are getting close to extinction as waters along the west coast, including in California and Mexico, warm faster because of climate change.

There are still some populations of sea stars in B.C. waters, but it's unclear if they'll survive, said Sara Hamilton, who is a PhD student at Oregon State University and lead author of the study.

These “charismatic creatures” have been wasting away since 2013, she said, and studies have shown this could be due to bacteria or a virus that thrives in warm waters.

“Mexico and Southern California sea stars were wiped out in a matter of a couple of months,” she said in an interview Tuesday.

“Whereas Alaska and British Columbia where it's much cooler, you know we still have remnant populations. So, there's evidence for sure that temperature is somehow related to it.”

Sea stars, also known as starfish, come in multiple bright colours, including purple, yellow and red. While many have five arms and are shaped like a star, other starfish species have 10, 20 and even 40 arms and can grow to a metre in diameter.

Alyssa Gehman, a co-author of the study, said she is worried about the large decline of the sea star population in B.C. waters.

Gehman is a scientist with the Hakai Institute, which conducts long-term scientific research in remote locations on B.C.'s coast.

“As everyone has experienced, the temperatures are increasing here as well, and so I'm really concerned that that's going to put the species at risk,” she said in an interview.

Hamilton said the sea stars have been ever-present and people are used to seeing them on the beach or while diving.

“Then all of a sudden they were gone. It's been an ecosystem loss, a cultural loss. A loss of childhood memories.”

Hamilton said the wasting disease that attacks them leaves white or discoloured lesions on their surface and can destroy adult and juvenile sea stars within 48 hours.

“Those lesions start to spread over their body, and I mean it would be like if we lost all of our skin,” Hamilton said.

“Their insides start pouring out. Some of their arms begin to fall off because the lesions disconnect their arms. It's very disturbing.”

The massive loss of sea stars has also upset the ecological balance in coastal oceans, as the starfish once kept sea urchins in check, which now feast on kelp forests.

Kelp is an important habitat for other marine wildlife to use for food and shelter, she said.

“As you lose sea stars, their role in the ecosystem dims and they shine a little less bright.”

Gehman said one of the solutions is raising the animals in a lab while working on finding out what is causing the disease.

“I mean stop climate change,” she said. “That is actually one of the things that we sort of come back to. But that really is the thing that needs to happen to save these animals.”

This report by The Canadian Press was first published Aug. 25, 2021.

The sex assault trial of Canadian musician Jacob Hoggard is hearing from a limo driver who drove one of the complainants to and from the Hedley frontman's hotel in 2016.