VICTORIA -- When Orb Norrie, a local tradesman, came to work on Tuesday morning he made a shocking discovery in an alley in downtown Victoria.

What he found was 713 used dirty needles, dangerously left for someone else to clean up.

“It’s really just that desperate for some of these people,” said Norrie.

It’s suspected that the needles were collected by someone desperate to get a fix. They may have been rummaging through the collection looking for any leftover drugs that could be found.

“It’s obvious by the plastic containers around here, they just went around and collected sharps everywhere they could, hoping to find something within them,” said the tradesman. 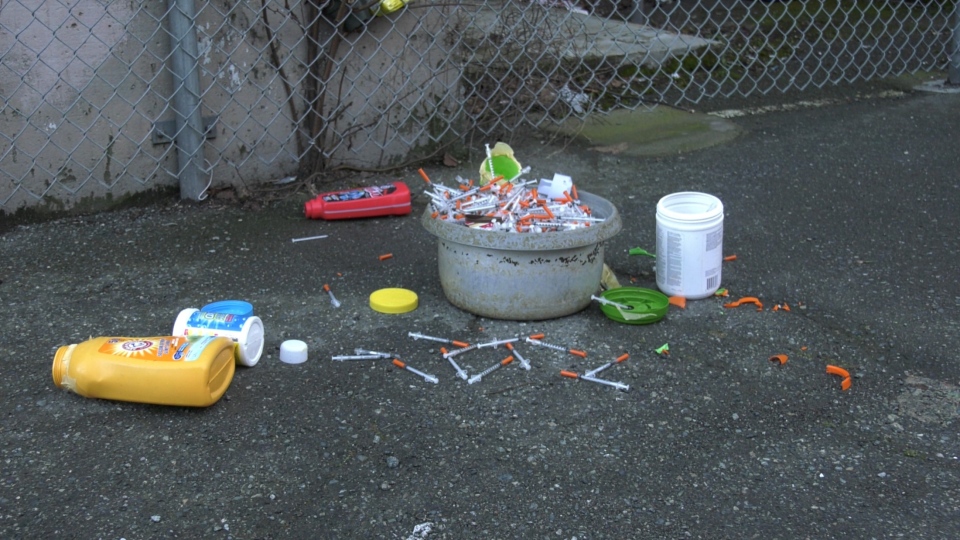 “Somebody who needs some dope will open up the sharps container and, you know, it might be their lucky day,” said Kaunter.

That was a 50 per cent drop from the previous year. A reduction that Kaunter says was due to the pandemic.

“The drug use went to the parks and to the places where the homeless concentrated,” said Kaunter. “Like the 900-block of Pandora (Avenue).”

Six years ago, Leslie McBain’s son died of an overdose.

“It has plunged that many families into a lifetime of deep grief,” said McBain.

Those bleak numbers have prompted Sheila Malcolmson, B.C.'s Minister of Addictions, to reach out to the feds to ask that B.C. be exempted from federal drug laws. She wants to decriminalize simple possession of all illicit drugs in the province.

“It is in the Federal Government's power to act and that is what we are encouraging them to do,” said Malcolmson on Feb. 11.

Meanwhile, B.C.’s top coroner wants to see more timely access to treatment and recovery, and a safe supply of drugs.

“This has gone on for too long and things need to change,” said Lisa Lapointe, B.C.'s Chief Coroner earlier this month. “There have been recommendations and there needs to be action.”

Community group SOLID Outreach agrees that a safe supply would save lives.

“If you partnered it with decriminalization for example, it would allow consistency to grow in terms of who’s producing and who’s selling – and by extension –what’s available to the people,” said Fred Cameron, operations manager with SOLID Outreach.

“It would definitely reduce the number of overdoses and save a lot of lives,” he said.

It's a move Cameron hopes would prevent scenes like what Norrie's construction crew found in downtown Victoria from happening again.