'It's a sad day': Thief makes off with Chemainus bear statue – again

VICTORIA -- A popular Vancouver Island ice cream shop is pleading for the public's help after one of the store's wooden mascots was stolen overnight.

Baby Bear's Ice Cream Shoppe owner Kathy Yeager says she was awoken at 2:30 a.m. Monday by an alarm on the shop's security camera.

Video provided to CTV News appears to show a man kicking the statue, which Yeager says was secured to the ground with rebar and cement.

The man then leans on the bear until it collapses, before putting the 140-pound statue under his arm and walking away. Two other bear statues were left behind.

Yeager says it's not the first time the business's custom-carved wooden bears have been taken.

"After bear number three, it's complete devastation," Yeager said, alluding to two prior thefts of the statues. "It would be $4,000 to replace it if you could. We can’t."

The custom bears are carved by an artist in Oregon, Yeager said.

“The kids of Chemainus know those bears," she said. "It’s a sad day.”

Yeager said thefts from businesses appear to be on the rise in Chemainus and says police response times are too slow.

“We have a problem here," Yeager said. "It’s affecting small businesses here. The RCMP are in Duncan and cannot get here fast enough.”

The Mounties have not yet responded to a CTV News request for comment on this story. 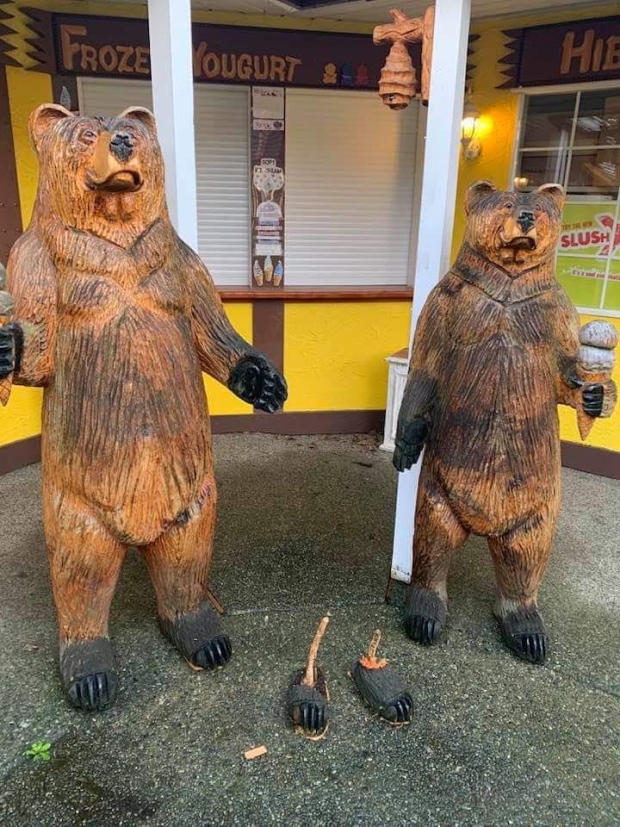