'It broke me': Men arrested after rainbow crosswalk defaced at Colwood school 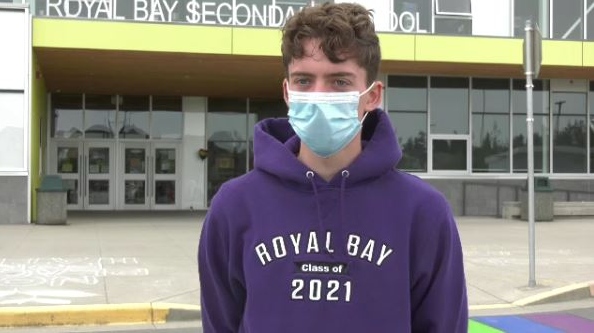 Grade 12 student Oscar Wood says his heart sank when he heard about what happened to the school's rainbow crosswalk, a project he helped lead: (CTV News)

Mounties say they were called to Royal Bay Secondary School just after midnight on May 16 for reports of a large group in the school's parking lot.

Witnesses told RCMP that approximately 18 to 20 people were at the parking lot spray painting the walls of the school.

The group reportedly fled the scene when confronted by a nearby resident, but one vehicle was spotted in the area when police arrived.

Mounties pulled over the vehicle and spoke with the three people inside. Two occupants were then arrested for mischief after police conducted a preliminary investigation, according to RCMP.

Both of the men arrested are Colwood residents, say police.

A Grade 12 student at Royal Bay Secondary school who helped lead the rainbow crosswalk project says he was gutted to hear the news.

"I woke up Sunday morning and saw a text saying that it had been vandalized and my heart immediately sank," said Royal Bay student Oscar Wood.

"I didn't know what to expect," he said. "I thought it was just going to be some scribbles on the sidewalk. But then when I saw images on social media it broke me. And then when I came down here it was worse than I ever could have imagined." 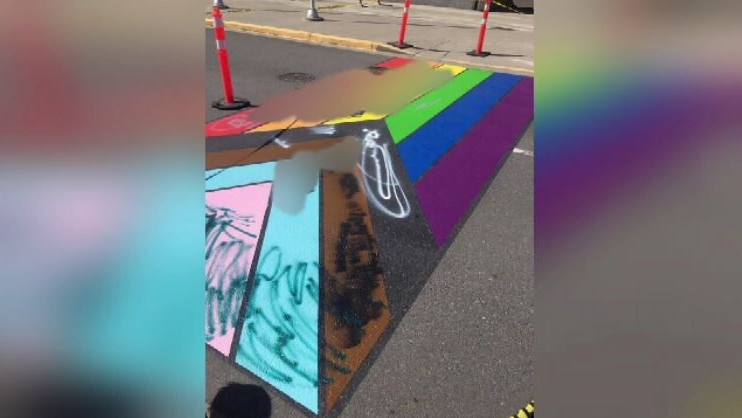 The vandalized crosswalk is shown. Some areas of the image had to be censored. The rainbow crosswalk has since been repainted.

Mounties say the extent of the graffiti at the school was not apparent the night that officers attended the scene. The next morning, community members noticed the range of graffiti, including "hate crime slurs" against the LGBTQ+ community, according to RCMP.

"The hateful things that they said, it hurt me because I had been thinking about this project and it finally came to fruition over the past four years – and for it to be vandalized in three days really ruined me," said Wood.

Despite his disappointment, the grade 12 student says he feels sorry for the people who felt that they needed to deface the rainbow crosswalk.

"I feel sorry for these people because something was obviously not good in their life and they had to take it out somehow," he said.

He added that while the community's support has been great, he doesn't want to fight fire with fire and address the situation with more hate.

"I have empathy towards them, I have compassion towards them, and that's what this crosswalk is all about," Wood said. "It's about inclusivity and mutual respect for everyone, including those vandals."

Wood says the tone at school has been somber in recent days, but many students have been vocal about their support for the LGBTQ+ community.

"It's great to see everyone come together," he said.

The rainbow crosswalk has since been repainted.

Police say two investigations are underway. One investigation includes mischief for spray painting the school, while the other involves inciting public hatred for the hate language and obscene sexual images that were painted on the rainbow crosswalk.

"This targeted attack on a symbol of welcome and acceptance is reprehensible," said Const. Meighan Massey of the West Shore RCMP in a release Monday.

"Behaviour inciting hate and intolerance will not be condoned in our communities," she said.

Anyone with information on the incident, or who was present during the spray painting, is asked to contact West Shore RCMP at 250-474-2264. Anonymous information can also be reported to Crime Stoppers at 1-888- 222-8477.