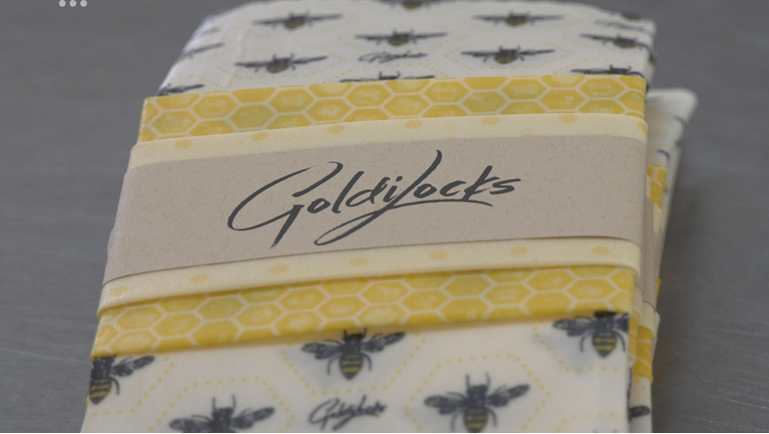 Waxed-based food wrap made by Goldilocks Goods, one of the companies participating in Blue Friday, is shown: (CTV News)
Victoria -

For the third year in a row, a group of businesses on Vancouver Island are offering shoppers an eco-conscious "Blue" alternative to Black Friday.

This year, 44 eco-friendly businesses have partnered with Surf Rider Pacific Rim for the "Blue Friday" campaign. This year’s goal is to raise $12,000 to replace the dock at the First Street Marina in Tofino, B.C.

One of the businesses that has participated in "Blue Friday" since it was started in 2019 is Victoria-based Goldilocks Goods. The company, founded by Amy Hall, makes a wax-based alternative to plastic wrap in a small studio in the Vic West neighbourhood.

Hall says the campaign was started in 2019 by 10 Victoria businesses with the goal of "changing the narrative" to more sustainable consumerism on one of the busiest shopping days of the year, Black Friday.

"A lot of the brands that are participating all have efforts in sustainability," said Hall. "They really wanted to find an alternative to the mindless mass consumerism that’s normally associated with Black Friday.

Hall says each participating business has pledged to donate between 15 to 50 per cent of all sales on Blue Friday. She says all of the funds raised will be donated to Surf Rider Pacific Rim for the dock replacement project.

Hall says the dock needs to be replaced because the foam floats that support the wharf are deteriorating and adding to the issue of debris in the Pacific coast.

"I know for us, as a sustainable business, we always struggled with Black Friday," said Hall. "We wanted to offer our customers a sale or discount because often times eco-friendly items are a little more expensive."

In the past two years, Blue Friday events have raised more than $20,000. That funding has allowed Surf Rider Victoria to purchase and install three ocean debris skimming devices, known as "sea bins" at a marina in North Saanich.

Volunteers with the Surf Rider Foundation say the majority of the debris captured by the sea bins is dock foam. They say the initiative has removed 4.5 tonnes of marine debris from the waters off the Saanich Peninsula.

Surf Rider estimates that 40 to 80 per cent of marine debris polluting the waters off the Vancouver Island coast comes from foam dock floats.

"We’re participating in Blue Friday because it really aligns with our values as an eco-friendly goods company," said Hall. "I founded Goldilocks because I wanted to help with ocean conservation and by being able to make a donation that helps to further that, especially when it comes to policy change as well, is a big part of that."