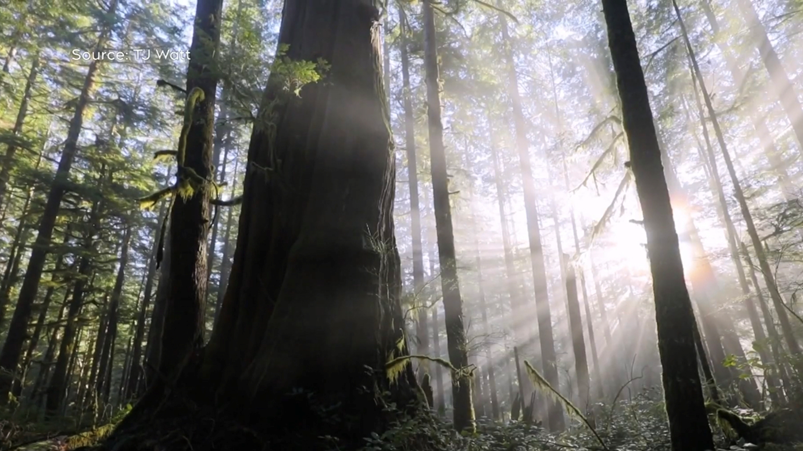 VICTORIA -- A new independent study released by the Ancient Forest Alliance shows old-growth forests on Southern Vancouver Island could contribute greater economic benefit to the region when preserved than harvested.

"By only considering short-term job creation, revenue and impacts to GDP (gross domestic product), the economics aren’t telling the whole story," she said.

Inness says the environmental group commissioned the report to see what old-growth forests were worth to B.C.’s economy when values like carbon storage, recreation and tourism were factors.

"If all old-growth forests in the study area were protected, society would be better off by $40 million compared to business as usual old-growth logging," said Inness. "Tourism alone would make up for any lost jobs by not timber harvesting and would cover almost 66 per cent of lost provincial GDP by not harvesting."

Inness says that under the same scenario, carbon emissions would be reduced by approximately 570,000 tonnes by preserving the ancient forests in the study area. She says the Port Renfrew region was chosen for the study because of its ecosystem services and its strong tourism and recreation base.

"We know that area has some of the finest old-growth stands on Vancouver Island," said Inness. "It's also an area that's well known, and throughout the course of this study the blockades were erected in that area and are ongoing, so it's drawn a lot of attention."

For the study, ESSA Technologies used computer modelling, provincial forest harvest data, and both market and non-market values for ecosystem services, such as, tourism, recreation and salmon habitat. It also considered non-timber products including research and educational opportunities.

The study is based on only a portion of the harvestable old-growth forest near Port Renfrew. The Ancient Forest Alliance says it does not include all ecosystem services – like cultural values – and it says the study’s findings are underestimates of the value of standing old-growth forests.

"Our hope is that this report will create a dialogue and create change so that going forward we are accounting for things like carbon storage, tourism and recreation," said Inness.

"The Ancient Forest Alliance has long been calling on the B.C. government to act immediately to protect the most at-risk ancient old-growth forests and halt logging (of ancient forests)."

One Vancouver Island First Nation says it is disappointed in the Ancient Forest Alliance report.

In an emailed release, the Huu-ay-aht First Nation in Port Alberni says the call for the immediate end of all old-growth logging did not take into consideration the constitutional rights and title of First Nations or their social, cultural and economic needs.

"Just like the rest of B.C., we need to develop a strong and vibrant economy so we can look after the needs of our people," said Huu-ay-aht First Nation Chief Councillor Robert J. Dennis Sr.

"We will follow the guidance of our elders and citizens to make the decisions we think are right. We are asking others to respect that process and follow our direction in our territory," he said.

On June 7, the Huu-ay-aht, Ditidaht and Pacheedat Nations announced they had reached an agreement to defer old-growth logging in parts of southwestern Vancouver Island for the next two years.

The First Nations said they informed the B.C. government of their plan to suspend old-growth logging in the Fairy Creek and Central Walbran areas while they develop long-term resource stewardship plans.

In today’s release, the Huu-ay-aht First Nation reaffirmed its commitment to developing and implementing an integrated resource management plan.