Impairment may be factor in View Royal Corvette crash: RCMP 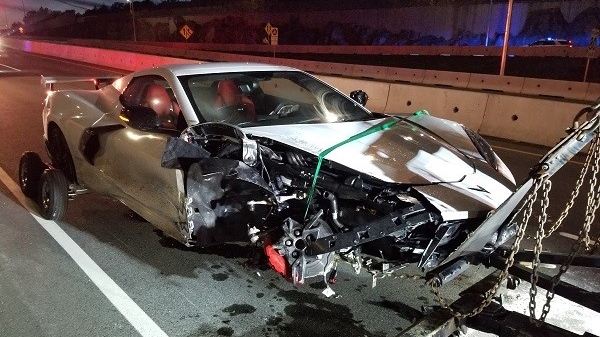 RCMP say the driver did not stay at the scene of the crash after it occurred: (West Shore RCMP)
Victoria -

West Shore RCMP say they are investigating a Saanich driver for potential impaired driving following a crash in View Royal on Friday evening.

The crash occurred on the Trans Canada Highway near the Helmcken Road onramp, just minutes after police received a report of a potentially impaired driver.

When officers arrived at the crash site, the Corvette was not there. Police say that officers found the vehicle near the McKenzie Interchange later that night, where the driver was then arrested.

Police say they are now investigating the 55-year-old driver for failing to remain at the scene of a crash, and for impaired driving.

"In light of the speeds reported by witnesses, we are relieved that no one was seriously hurt or killed in this collision," said Const. Meighan Massey of the West Shore RCMP in a release Monday.

"This collision is a stark reminder of the increased risks on our roads with the onset of summer activity," she said. "With the lifting of restrictions comes the increase in local travel and socialization. Please remember to arrange for a safe ride home if you are going to be out drinking."

Police say the investigation is ongoing. Anyone who witnessed the incident, or who may have dashcam or cellphone footage of the crash, is asked to call the West Shore RCMP at 250-464-2264 or contact Crime Stoppers anonymously at 1-888-TIPS (8477).