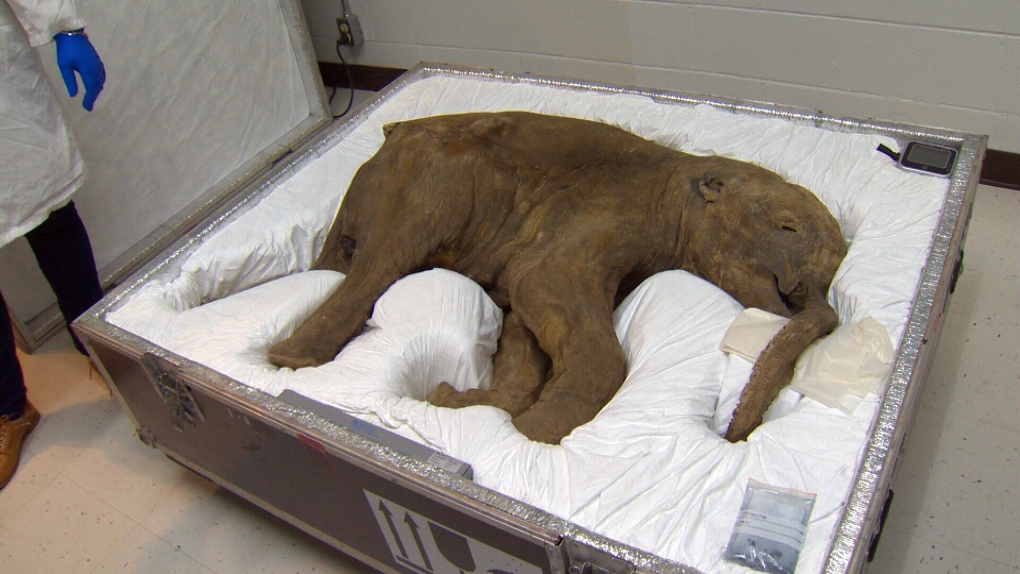 Lubya, a 40,000-year-old preserved baby woolly mammoth, will be on display at the Royal BC Museum in Victoria as part of a new exhibit opening June 1. May 27, 2016. (CTV Vancouver Island)

Experts call it “the greatest mammoth find ever,” and it’s coming to Victoria’s Royal BC Museum.

The RBCM is unveiling a 40,000-year-old baby woolly mammoth in remarkable condition as part of its Giants of the Ice Age exhibit opening June 3.

Museum CEO Jack Lohman said it’s Canada’s first opportunity to see the ancient, majestic creature, dubbed Lyuba, after it was discovered in the Siberian Arctic in 2007.

“This is the best preserved baby mammoth ever found. We’re hugely excited to have brought it from Russia to show the public here,” Lohman said. “In a way, it brings us a step closer to understanding the disappearance of the mammoth, and it allows us to time travel to the great ice age.”

The female mammoth was only 30 days old, 110 pounds and just over one-metre-long when she suffocated after becoming trapped in mud along the banks of a river, according to scientists.

Her body was preserved by lactic acid-producing bacteria, a microbial process that “pickled” her soft tissues.

Soft tissue sample and an analysis of her tusks suggest she was healthy at the time.

“She has her complete skin. You can see her eyelashes very, very clearly. She’s got hair. And the whole contents of her gut exist and have been examined,” Lohman said.

He called it one of the most important exhibitions the museum has every hosted.

Lyuba is on loan from the Shemanovskiy Yamal-Nenets District Museum in northern Siberia, Russia.

The exhibition opens next Wednesday and continues through to the end of 2016.