'I was telling him to stop': Police searching for minivan that crashed into View Royal home 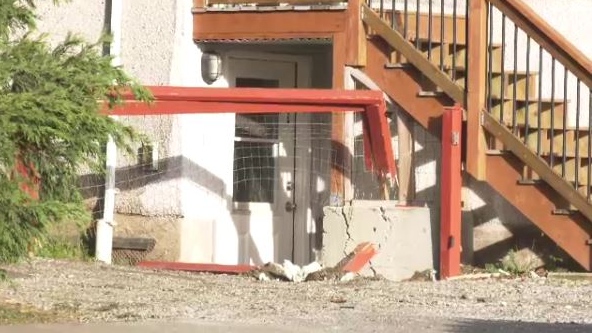 VICTORIA -- West Shore RCMP a searching for a vehicle that crashed into a View Royal property before allegedly driving away Monday.

Homeowner Derek Cooper says he heard the crash, then saw the vehicle drive away from the property.

“Last night I was just hanging out in the living room, everyone else was asleep in the house, and I heard a big crash,” he told CTV News.

“I came out here and I saw a grey minivan who had smashed into the front-end of one of my tenant’s vehicles,” he said. “They proceeded to go forwards and backwards trying to get out. They ended up bouncing off and snatching the fence line right there and they just took off down Island Highway.”

Before the vehicle had left the area, Cooper says he was trying to communicate with the driver.

“I was telling him to stop,” he said. “I was yelling at the vehicle as loud as I could to stop.”

“I have a feeling the front windshield was smashed out so I’m certain the driver could hear me,” he added.

RCMP officers searched for the vehicle Monday night but were unable to locate it. Police are now asking for the public’s help in locating the suspect vehicle.

The minivan is described as silver or grey in colour with heavy front-end damage. It may have broken some windows during the crash, and the licence plate may begin with the JT9, say police.

Cooper says he’s also grateful for his neighbours, who helped look for his dog after the crash occurred.

“I just want to say thank you to everyone who came out last night and who tried to help find our dog,” he said.

“There was probably about 12 people from the community here who came out after hearing the crash and went and walked through the backstreets trying to find our dog. So I want to give them a thank you.”