'I was so excited': Dog reunited with family 7 days after falling from cliff on Vancouver Island

'I was so excited': Dog reunited with family 7 days after falling from cliff on Vancouver Island

A beloved pet that went missing in the Highlands area of Vancouver Island was found seven days later by an army of volunteers.

The mastiff-retriever cross, named Luna, was found desperately clinging to a narrow ledge on a cliff, and was reunited with her owner after a heroic rescue last month.

It's believed that Luna had chased an animal out of her yard and got lost, somehow falling off a cliff and landing on a two-foot wide ledge. She remained there, alone, as her owner and searchers frantically looked for her.

"It was terrible because it was getting colder and she always sleeps next to me or my daughter," said Saryta Schaerer, Luna's owner.

After she'd been missing for several days, there was a break in the case from the other side of Finlayson Arm.

Across the water, Ron Cheeke had heard Luna's cries for help. 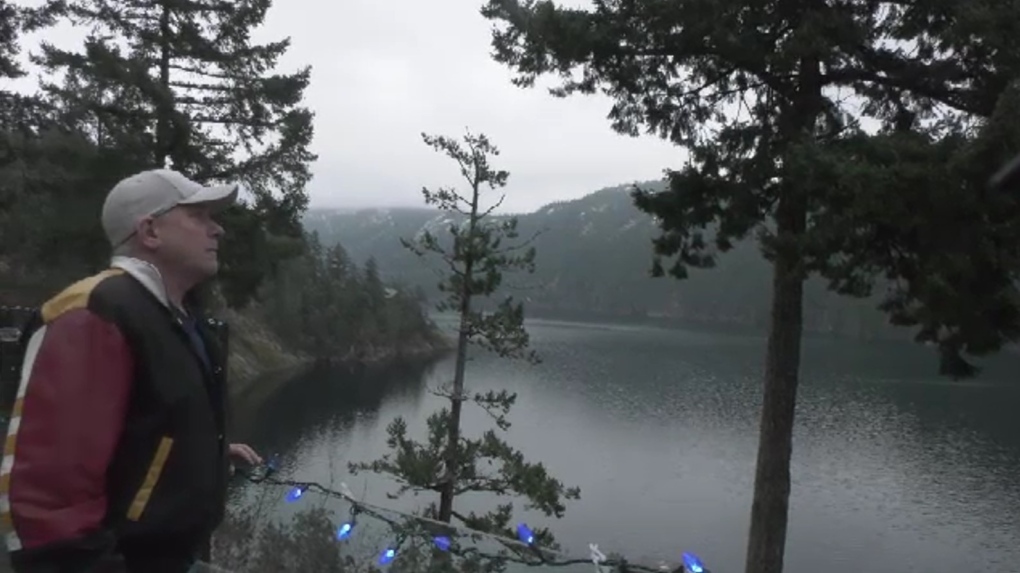 Ron Cheeke is pictured. (CTV News)Cheeke decided to record the sound and notify the pet rescue group ROAM. He even went so far as to search the area on boat to try to locate the exact source of the sound.

"I used a pot and pan, and every time I banged on the pot and pan the dog barked back," Cheeke told CTV News on Monday.

Eventually, after searching on both water and land, a team found the scared dog and used a harness to pull her back to safety and to her owner.

"I almost fell over when I saw her, it was quite exciting," said Schaerer.

"I was so excited, she was too," said the dog owner. "Her butt was wiggling from left to right."

Cheeke says his own dog had died recently and he was motivated to help.

"I lost my dog last year, so it was good," said an emotional Cheeke.

"It's good to see it back with its owners," he said.

ROAM volunteer Andy Carswell says seeing the reunion was thanks enough for all of the days spent searching.

"There's no feeling like it. When you're involved with this and you get the owner back with the pet, it's worth all the money in the world," he said.

Carswell also has a message for other pet owners if their animal goes missing.

"Your dog's out there, it's just a matter of time until we get her," he said.

"Sometimes they come back in an hour, sometimes it's a day, sometimes its seven, like Luna," he said. "Just don't give up, have faith."

He added that Luna didn't give up while trapped alone in the cold for seven days, and that pet owners shouldn't give up on their animals as well.

Nine people were seriously injured after a Laval city bus crashed into a daycare Wednesday morning, according to first responders. The driver of the bus has been arrested, according to Quebec Public Security Minister Francois Bonnardel.

Conservative Leader Pierre Poilievre says that if he becomes prime minister he would uphold the 10-year deals Prime Minister Justin Trudeau is looking to ink with provinces and territories that would inject $46.2 billion in new funding into Canada's strained health-care systems.

An associate of Ontario’s self-described “crypto king” was operating his own fraud scam parallel to the multi-million dollar Ponzi scheme, court documents allege.

opinion | Tom Mulcair: This is why the federal health-care proposal is so disappointing

Justin Trudeau has thrown in the towel in the fight to maintain the federal role as gatekeeper of a public, universal, accessible and fair health-care system in Canada, writes former NDP leader Tom Mulcair in an exclusive column for CTVNews.ca. 'That could have tragic consequences for folks on the lower rungs of the social and economic ladder.'

Fir trees are under attack in the British Columbia interior, where severe drought and heat are putting forests at risk due to bark beetles.