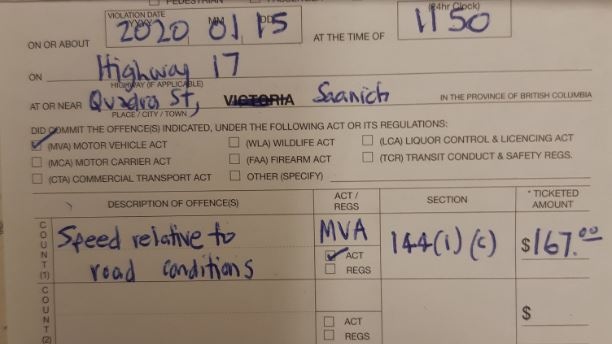 VICTORIA -- Police officers get all kinds of excuses from drivers attempting to get out of tickets, but on Wednesday, in near whiteout conditions, Victoria’s Chief of Police got a new one.

After pulling over a driver in the midst of a winter storm, the chief was given a geographic excuse for speeding. The driver said he could handle the conditions because he was from Alaska.

Pls SLOW DOWN. Roads are icy, full of snow & unsafe. Ticketed driver for flying past me at 90kmh (in a 80 zone) when everyone else was going 60kmh. The normal speed limit doesn't apply during bad weather. Reason- I'm from Alaska and I'm comfortable driving in snow. @vicpdcanada pic.twitter.com/pROBHHuNNd

Chief Del Manak says he was driving into work on Wednesday on the Pat Bay highway when a vehicle blew by him at an unsafe speed for the conditions.

“The roads were terrible,” said Manak. “You could barely see pavement.”

Manak, who was in an unmarked police car, says a sedan flew by him at roughly 90 km/h in an 80 km/h zone. Victoria’s top cop says he and the rest of traffic was traveling at around 60 km/h.

Manak took the driver’s license plate number, but did not give chase as he didn’t feel it was safe to accelerate on a snow covered highway. A few moments later, the chief caught up to the driver at a stop light and pulled him over.

The driver then offered his excuse. He told the chief that he was from the U.S. state of Alaska and that he often drives in cold and snowy conditions. The chief says that while the driver was always respectful, he still didn’t bite on his attempt to weasel out of a Canadian driving infraction.

On the ticket, which Manak posted on social media, he issued a speeding relative to road conditions infraction with a fine of $167 dollars.