A residential school survivor who credits painting with saving her life is now using her childhood artwork to educate others about the horrific experience.

Gina Laing was forced to attend the Port Alberni Residential School from 1954 to 1964.

“We were abused in every area you could think of,” she says. “Sexually, physically, emotionally, mentally, spiritually.”

But at 10 years old, Laing found solace in an after-school art class where her instructor encouraged creativity.

“He gave us a way of looking at things differently, and he gave us the opportunity to express ourselves,” she says.

More than 50 years later, Laing was reunited with one of her childhood paintings through the Residential and Indian Day School Art Research program at the University of Victoria.

“I had the memory right away about why I had painted it,” she says. “I call it the beach scene. This is my home reservation beach.”

Since she rediscovered her childhood art, her passion for painting has become a way for her to heal from the trauma she suffered in the residential school.

“I can put it on paper and once that’s done, I feel like it’s no longer inside of me, eating at me,” Laing says.

Every piece of art she produces is another heartbreaking memory. She points to a painting of a former teacher holding a strap in one hand and Laing’s her in the other.

“That’s a leather strap that she used to use on the children,” she says. 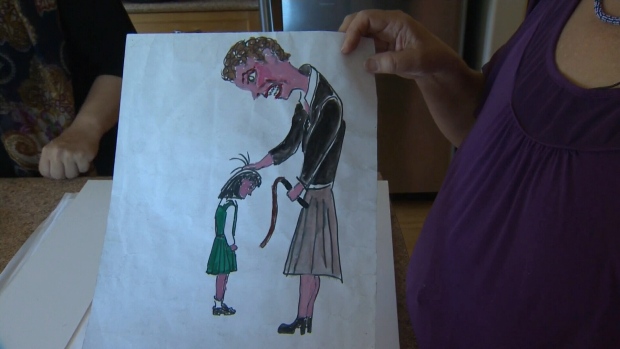 Other pictures are simply too dark to share, like the painting of the man she says sexually abused her and other kids.

“This is a picture of my offender. He used to dress us in costumes and molest us and rape us.”

While the memories are grim, she says the artwork has become a way to share her past with her children, grandchildren and great grandchildren.

“If that hadn’t happened, I don’t think that my mom would be here,” says Laing’s daughter, April Thompson. “It took a lot of courage and power, and that’s what my mom has.”

Others will have the chance to learn from her pictures as well.

Laing’s artwork will go on display in the Canadian Museum of History in Gatineau, Que. On July 1. 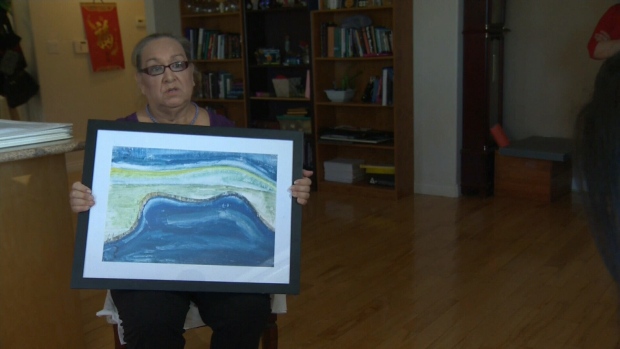 Gina Laing was reunited with a painting of a beach she did at an after-school art class while forced to attend a residential school in Port Alberni. The painting will be on display at the Canadian Museum of History in Quebec on July 1. March 30, 2017. (CTV Vancouver Island)