Researchers have now completed the necropsy of a humpback whale that washed ashore earlier this week on Malcom Island, B.C., and early indications are that the mammal died after being hit by a vessel.

Paul Cottrell of Fisheries and Oceans Canada says it will likely take several weeks or months for the final results to be known, after a first examination of the whale known as Spike revealed some clues.

"With this animal one thing that stood out, there was a large blunt force trauma event on the dorsal side, suggesting a significant impact which could possibly be a vessel strike," he said. "We’ll obviously be looking into it in more detail." 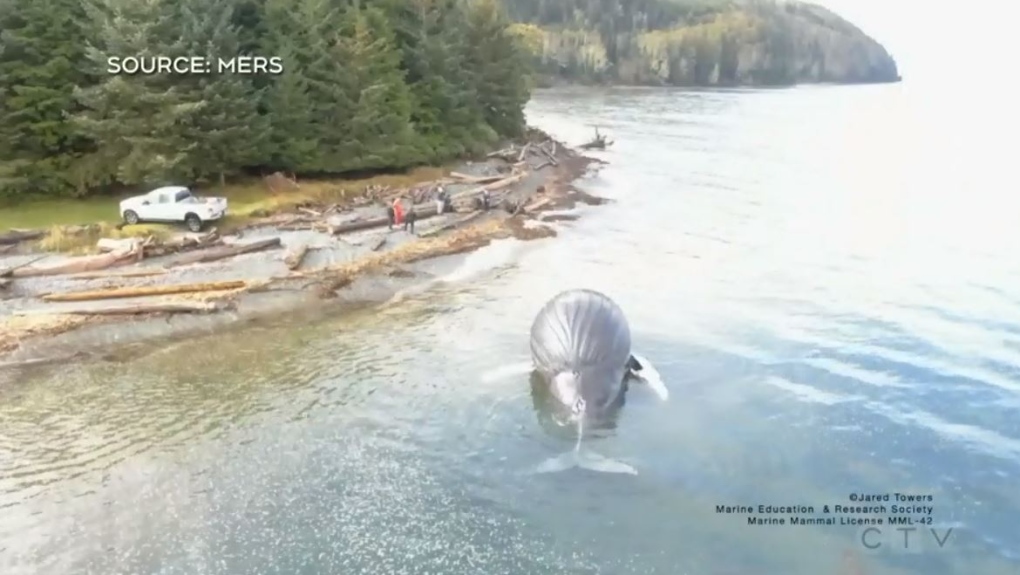 Tissue samples were taken from that area of the mammal and will be reviewed by Dr. Stephen Raverty of the Marine Mammal Research Unit.

Cottrell says Raverty has reviewed initial photographs but will also look at samples once he returns. A final report on the death should be ready within a few months.

Members of the ‘Namgis First Nation performed a ceremony for the whale just prior to the necropsy.

Chief Don Svanvik says the ceremony was an act of respect for the whale.

"There’s a very significant place in the stories of some of the Kwakwala Nations and it fits in within all our nations in regard to ceremony and rights and privileges," Svanvik said.

Marine Education and Research Society member Jackie Hildering says she was touched to observe the ceremony before participating in the necropsy.

Hildering says she was quite familiar with the whale through her research.

"The grounding for me, having had the privilege of being there, the grounding for me for the work I had to do afterwards to try to help reveal what killed Spike – I don’t know how I would have achieved that without having been there at the cultural ceremony," she said.

Hildering is hoping the death of the mammal will serve as a teaching moment for the public.

"Spike provided in her death a very rare opportunity to learn," she said. "To learn from the cause of death and getting people to care and understand that these are individual whales and what the threats are."

"We really want Spike’s story to count – that every humpback is usually known, they’re neighbours. We have this second chance with them," said the researcher.

"It’s difficult to believe that this would have been anything other than the result of having been hit by a large vessel," Hildering said.

Svanvik says discussions will now need to be had to determine what to do with the whale’s remains.

"We need to have a discussion on what we’d like to see. I know previously there have been skeletons that have been put on display and that. I don’t know if that is something we would entertain," he said.

Cottrell says if the entire skeleton isn’t obtained by the ‘Namgis, the preference would be for the remains to go back to nature.