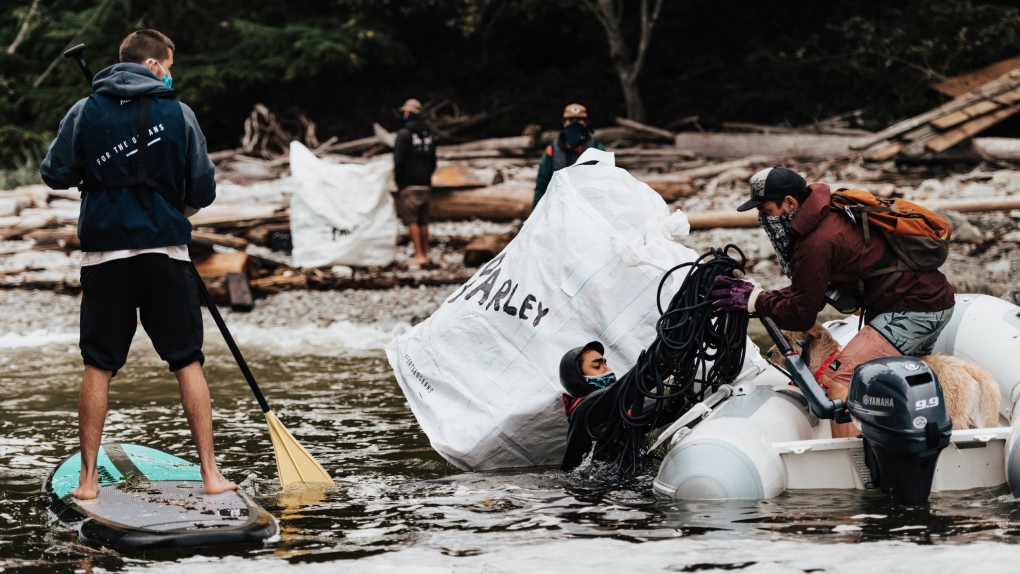 VICTORIA -- A Vancouver Island-based charity that designed its own method of remote beach cleanup is thanking a Nanaimo couple for making their mission possible.

The Rugged Coast Research Society (RCRS) was founded in 2017 with the intention of mapping out where plastic garbage was accumulating along the West Coast of B.C., and to eventually remove it.

The small non-profit team mapped several large areas of the coast for marine debris buildups but were unable to remove the debris due to the remote nature of where the garbage was located.

The RCRS says that, generally, cleaning up marine debris along remote beaches involves using a helicopter to hoist large sacks of garbage onto a barge.

“At a rate of approximately $1,000 an hour for the helicopter and $1,000 a day for the barge, a lot of fundraisers and small donations would be required for this small Nanaimo-based charity to achieve their goal,” said RCRS in a statement.

Knowing that conventional means of beach cleanup would likely be impossible for the charity, the team developed a unique method of hauling out garbage from remote locations.

RCRS says that team members learned to paddleboard into remote beaches, lash large sacks of garbage to their boards, and then row them out to a waiting boat.

Alternatively, the team would row a small inflatable aluminum-hulled boat to the beach, load it with debris, and then tow the inflatable boat out using a power boat.

“The Rugged Coast team practised these techniques and concluded that they could be done safely and efficiently and at minimal cost,” said the RCRS. “But, there was still one problem: The society did not have a vessel large enough to transport the marine debris once retrieved and the cost of a barge was still beyond their financial reach.”

The RCRS says that is no longer a problem, thanks to a donation from a Nanaimo couple.

The couple, David Stanley and Ria De Vos, heard of the RCRS and their need for a vessel and reached out to the non-profit society. The RCRS told the couple that it would need approximately $35,000 to purchase a boat large enough to haul the collected debris.

Stanley and De Vos donated enough funds to purchase the vessel, and donated an additional $30,000 on Sept. 28 for the RCRS to purchase more equipment.

“David and Ria’s generosity has also motivated the small non-profit registered charity to look past the economic challenges presented by COVID-19 and to continue investing volunteer time and personal money into protecting what they love,” said the RCRS. “Hat’s off to you David and Ria!”

While the total amount of garbage removed by the society so far has not been released, at least several tonnes of garbage have been hauled off Vancouver Island and smaller B.C. Gulf Islands since May 2019.