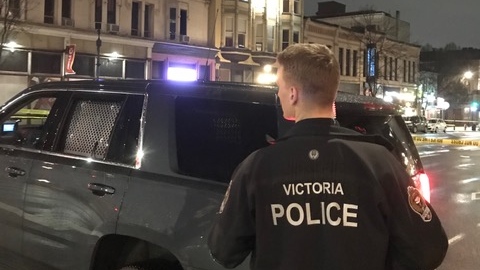 The incident began when a security alarm at a downtown Victoria business was activated, alerting police: (Lisa Best / CFAX 1070)

VICTORIA -- A dramatic early morning standoff in downtown Victoria ended with the arrest of a woman Thursday.

The incident began in a Douglas Street apartment building, which was first called in to police as a break and enter on Broad Street.

Shortly after 1 a.m., Victoria Police were called to the 1300-block of Broad Street for reports of an alarm at a business. Once on scene, police located a woman who was believed to have been the person who broke into the business, who then fled to the building's rooftop.

She then broke into a nearby apartment building on the 1300-block of Douglas Street and barricaded herself into the second suite she entered. During that time, the woman discharged a fire extinguisher and pulled the fire alarm.

Once the fire alarm was pulled, many residents of the building evacuated.

The Greater Victoria Emergency Response Team (GVERT) was then called to the scene. Police say negotiation attempts were made, but were unsuccessful, so GVERT officers took the woman into custody.

During the arrest, police say a distraction device was used, which led to reports of an explosion in the area.

At the request of the woman, she was taken to hospital where it was determined she was not injured and was released to police.

Officers are recommending multiple counts of break and enter and mischief.