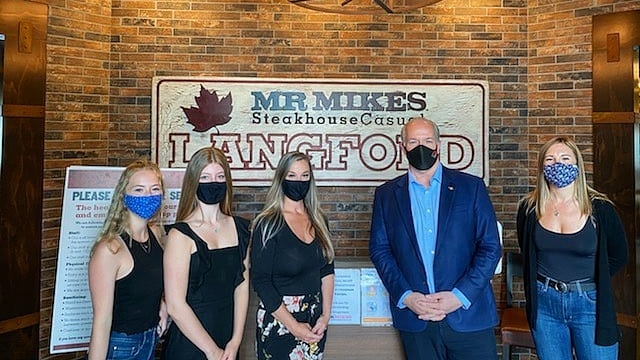 VICTORIA -- B.C. Premier John Horgan made a stop at a Vancouver Island restaurant after staff at the restaurant reportedly faced abuse for trying to maintain provincial health orders that limit the number of guests per table.

Last week, staff at the Mr. Mikes restaurant in Langford said that two young staff members were almost brought “to the point of tears” when they faced verbal abuse for trying to separate a large group of diners into two tables of six, as per public health orders.

On Thursday, B.C.’s premier told reports that he considered those customers “idiots” for their behaviour.

"Certainly, that's not how I raised my kids and I think most people across British Columbia are horrified when they hear stories like the story coming out of Mr. Mikes," Horgan said at the time.

"You’ve got employees that are doing their level best to provide an opportunity for people to come together, to share a meal in a safe, comfortable place and to have idiots come in and be idiots is, quite frankly, not acceptable."

One day after Horgan made his comments, he visited the restaurant located in his Langford-Juan de Fuca riding.

“Yesterday, we had our premier come by to have a chat with one of our owners and the staff members who were present during an incident that took place in our restaurant on Wednesday evening,” said the restaurant on social media on Saturday.

“We appreciate all the support from the community regarding the situation and it is time we all stick together and remember to be kind!”

While Horgan says he was disappointed to hear about the recent incident at Mr. Mike’s, B.C.’s premier added that stories of kindness far outnumber incidents of negativity in B.C.

"There's a whole host of stories that are emerging about bad behaviours during this pandemic," said Horgan Thursday. "And, unfortunately, they overshadow the extraordinary stories of kindness that are emerging in every part of British Columbia."

The Langford restaurant is asking customers to be respectful towards staff and to stay home if they are unwilling to adhere to public health orders.

“From hosts to dishwashers, from line cooks to servers, shout out to all of the hospitality workers, thank you all for what you do,” said Mr. Mike’s.