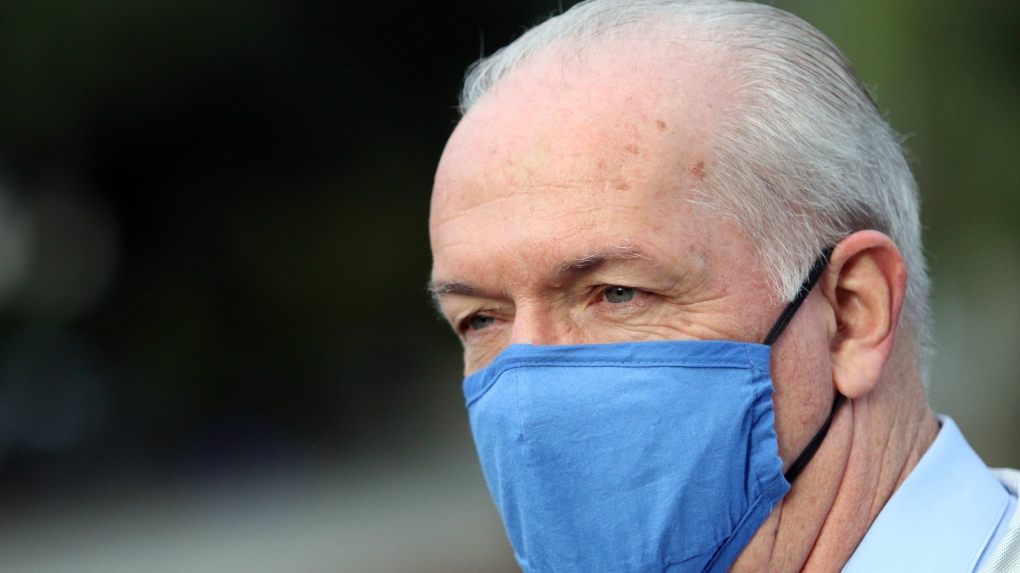 VICTORIA -- Premier John Horgan cemented a majority government in British Columbia, but escalating COVID-19 cases threaten to take plans out of his hands.

The final count of mail-in and absentee ballots on Sunday gave the New Democrats 57 of 87 seats in the legislature, the Liberals 28 seats and the Greens two, although a judicial recount is pending after a close race between the Liberal and Green candidates in West Vancouver-Sea to Sky.

COVID-19 cases in the province continue to spike with B.C. reporting another 998 infections detected over two days. The number of people in hospital has increased to 133 and five more people have died.

At a news conference on Monday, Horgan cautioned that if the numbers don't ease, the province may bring back stricter public health measures.

Horgan said restrictions on social gatherings, travel and other activities are not designed to make life uncomfortable, but to allow schools to stay open, surgeries to continue and the economy to keep running.

“Our focus is to make sure that we keep our economy, open and keep it functioning safely.”

He said he'll be forming a new cabinet in the days ahead and hopes to be back in the legislature by December.

While his immediate concern is responding to rising COVID-19 cases, Kim Speers, an assistant professor in the school of public administration at the University of Victoria, said Horgan's policies will need a post-pandemic lens.

The government is already in debt because of the pandemic and it will have to make hard choices about the projects it wants to focus on, she said.

Social programs, infrastructure, transportation, education and housing will have to compete for dollars amid ongoing crisis spending aimed at tackling the pandemic and its impacts, she said.

“It's going to be a struggle in terms of paying for some of those promises given that there's lots of unknowns right now in terms of where (and) how long this pandemic is going to last and just what the impacts of the pandemic are going to be.”

B.C. will especially need to consider its reliance on resource sectors once the pandemic winds down, she said, by adding training and education opportunities to help people get through the changing economy.

Mark Pickup, an associate professor at Simon Fraser University's department of political science, said the issues of climate change, housing and Indigenous affairs may not get the attention the government had promised because of the pandemic.

While the government has the freedom to pursue the agenda it promised, it's now fully accountable for everything it does, said Rob Gillezeau, an assistant professor in the University of Victoria's economics department.

“I'm pretty happy to see that the premier has signalled that even with the majority government it still intends to take a co-operative approach, especially with respect to public health,” he said.

Gillezeau said he'll be watching for the Horgan government's budget next spring and added major changes need to occur early in the mandate.

But he said there are a number of things out of the province's control that could be a “drag” on B.C.'s economy, including the possibility of another recession and if the Americans can't agree to a fiscal stimulus package.

The pandemic has hit women and people of low- and middle-income classes harder than others and Gillezeau said he would like to see the government step in and help them weather the storm.

Although the province has seen a “pretty nice” recovery over the past few months, he said the rising COVID-19 numbers might slow that trend.

“So, the virus itself really shapes what government needs to do to support the economy in particular,” he said.

“The best way to support the economy right now is to beat COVID-19. There is no economic program more effective, dollar for dollar, than actually just dealing with the virus.”

This report by The Canadian Press was first published Nov. 9, 2020.