Historic farmstead to be demolished in Central Saanich 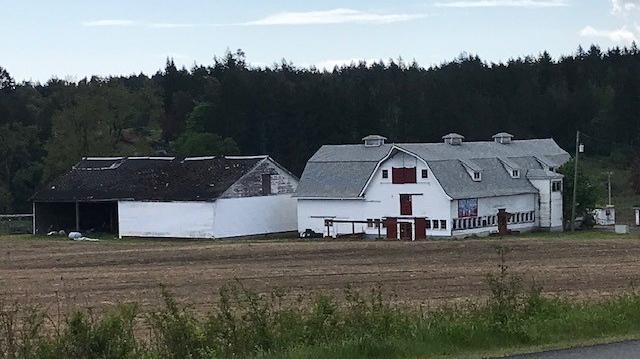 The so called “hay barn” to the left of the iconic Woodwynn Farm Market building is one of several buildings slated for demolition on the property.

VICTORIA -- Two historic farm buildings in Central Saanich are coming down, including a barn built over 130 years ago.

Central Saanich council has approved the demolition of two barns and five other structures on the former Woodwynn Farms property located on West Saanich Road.

One of the structures to come down is commonly referred to as the Woodwynn Farms Barn, and was built in 1887 by William Thomson. Another building, a historic hay barn, will be dismantled. Both are on the municipality’s heritage inventory list but do not have heritage designation.

After an assessment was done in 2019 by the former owners of the property, BC Housing deemed the buildings to be structurally unsound and would require extensive repairs.

Years of neglect from previous owners have led to the buildings' state of disrepair and hazardous condition, according to the municipality.

The Tsartlip First Nation says it took ownership of the property in December 2020 and would have liked to keep the buildings if they were not unsafe.

Seven structures in total are slated to be demolished under an application submitted to council.

But, Central Saanich Mayor Ryan Windsor says he wants to assure the community that one of the most iconic and visible landmark on the property will not be demolished.

“The structures in question – and I will characterize it as this – do not include the structure, the barn that is characterized as the 'market barn' that’s most visible from the gate at West Saanich road,” said the mayor.

“That, to our understanding, is not included,” said Windsor, adding that some of the buildings slated for demolition are not visible from the road.

“One of them is way at the back of the property, another is closer to the structure that is visible from the road,” he said.

Windsor says wood salvaged from the demolition will be repurposed by the Tsartlip First Nation. Some of it will be used in a way to reflect and honour the farm's history.

It’s not known when the structures will be removed.

The so called “hay barn” to the left of the iconic Woodwynn Farm Market building is one of several buildings slated for demolition on the property. Mayor Windsor says the building on the right is not one of them.