This year, however, the nation’s Remembrance Day ceremony is going to be a bit different.

It’s an ask that Angus Stanfield, vice president of Dominion Command and local chairman of the poppy and remembrance committee is having a hard time coming to terms with.

“We’re pleading with people to not come down this year,” said Stanfield.

This year’s Remembrance Day ceremony at the cenotaph in Victoria’s inner harbour will be a lot different.

There will be no street closures, no parade and no crowds.

“Our plan is, there won’t be more than 20 people at the cenotaph,” said Stanfield. “There’s only going to be five wreaths laid.”

The wreaths will be laid by various dignitaries as well as this year’s silver cross mother. There will also be a padre with a prayer and two minutes of silence.

“We really hope to see a lot of people being able to pick up a poppy – and wear your poppy with pride,” said Lew Forth, president of Nanaimo’s Legion Branch 256. “To remember the people that have given the ultimate sacrifice.”

Because of COVID-19, you’re not going to see many volunteers selling those poppies. Now, Legions across the county have partnered with HSBC to make accessing a poppy during a pandemic possible.

“They’re actually going to have the poppy box there so you just walk-up, tap it with your card and pick-up a poppy,” said Forth.

It’s a pilot project being launched across the country. Nanaimo is the only location on Vancouver Island that will have these boxes.

CTV News asked people in Nanaimo what they thought of the idea. The response was mixed.

One women said, “It’s a good idea, it would save people from stealing the boxes.”

Another women wasn’t so fond of the idea.

“I’d be a little bit leery about just tapping my debit card or credit card. I prefer to give cash,” she said.

Donations from the poppy boxes are used at local Legions to help seniors.

“Across Canada I believe it’s somewhere around $20 million raised every year,” said Stanfield.

In Victoria, 60,000 poppies are being prepped, just like in past years, to be mailed out to homes.

“I just hope that everybody does pick up a poppy somewhere, somehow and wear a poppy on Remembrance Day,” said Stanfield. 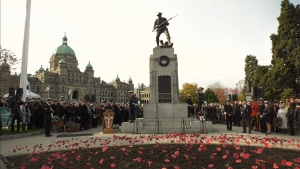