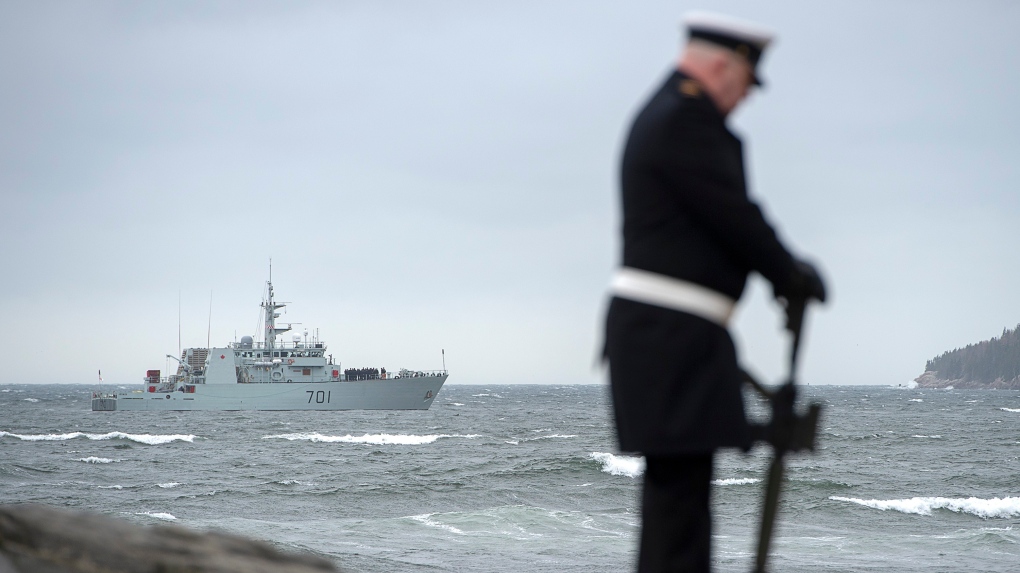 HMCS Glace Bay, a Kingston-class coastal defence vessel, cruises near the shore as friends, family and military personnel attend the 50th anniversary of the fire and explosion in HMCS Kootenay at the Bonaventure Anchor Memorial in Point Pleasant Park in Halifax on Wednesday, Oct. 23, 2019. Nine sailors died and 53 others were injured after an explosion aboard HMCS Kootenay off the coast of England on Oct. 23, 1969. (THE CANADIAN PRESS/Andrew Vaughan)

HALIFAX - A ceremony was held today to commemorate the worst peacetime accident in the history of the Royal Canadian Navy, which happened 50 years ago in seas off England.

An explosion and fire aboard HMCS Kootenay killed nine of its crew members and injured 53 others as toxic smoke filled the vessel.

The anniversary was marked with a remembrance ceremony at a naval memorial in Halifax's Point Pleasant Park.

Dozens of former crew, their families and dignitaries including Nova Scotia Premier Stephen McNeil were on hand to pay their respects.

Allan “Dinger” Bell was one of three men to survive the explosion and fire in the engine room, and he describes the experience as hell.

Bell sustained third-degree burns to nearly half his body and was awarded the Wound Stripe earlier this year.

The award was created in 2001 to recognize members of the Canadian Armed Forces who died or were wounded under honourable circumstances as a direct result of hostile action during service to the country.

This report by The Canadian Press was first published Oct. 23, 2019.