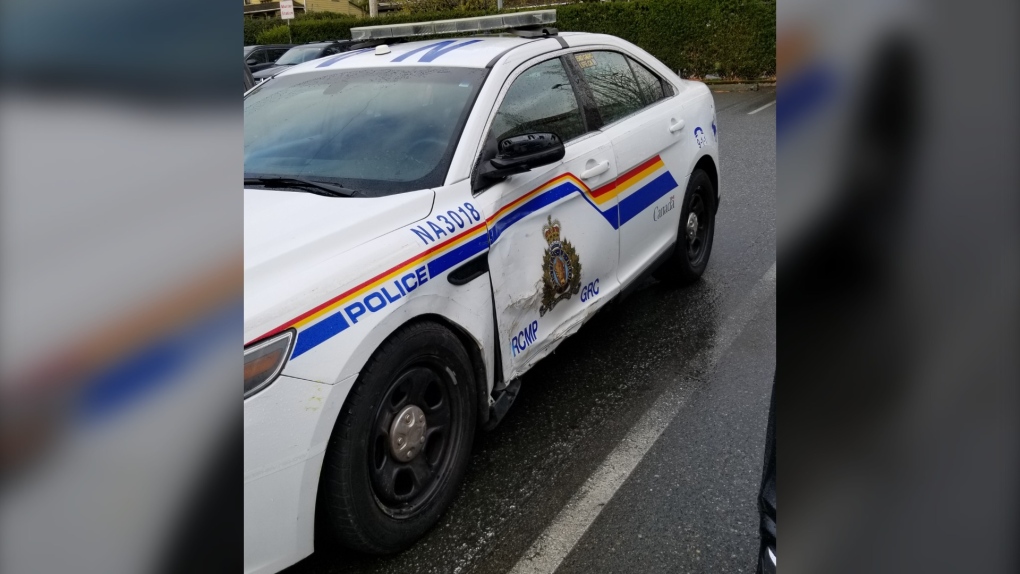 VICTORIA -- An alleged impaired driver had his vehicle impounded and licence suspended after he crashed into a Nanaimo RCMP cruiser on Wednesday.

The crash occurred around 5 p.m. Wednesday near the intersection of Dufferin Crescent and Bowen Road, according to police.

At the time, Mounties say an officer was pulled over on the side of Dufferin Crescent writing a report when he was side-swiped by the driver.

Police say the officer first heard his side-mirror shatter, then "watched as a Jeep SUV careened along the driver side of his vehicle."

Mounties say the driver did not stop after the collision and continued driving along Dufferin Crescent.

The officer was not injured in the crash and decided to pursue the vehicle. He was able to pull the SUV over at a nearby apartment building, at which point the Mountie noticed the driver was likely impaired.

When the officer went to speak with driver, the driver reportedly had difficulty standing and needed to lean against his vehicle to stay upright. Police say the Mountie also noticed a "very strong odour of liquor" coming from the driver.

The driver was then arrested for impaired driving and was taken to the Nanaimo RCMP detachment. Once there, he provided multiple breath samples, all of which recorded a blood-alcohol level that was more than four times the legal driving limit, according to RCMP.

Officers were concerned enough that they contacted an ambulance to check the man for alcohol poisoning as a precaution. He was brought to hospital for treatment and was later released.

The 44-year-old driver was charged with driving while over the legal limit, had his vehicle impounded for 30 days and had his licence suspended for 90 days, say police.

"Given his gross state of impairment, the time of day and the amount of traffic in that area, this situation could have easily turned tragic," said Const. Gary O’Brien of the Nanaimo RCMP in a release Friday.

If you see a driver that you believe is impaired, Nanaimo RCMP urge you to call 911 and have some information prepared if possible, including the vehicle's licence plate, a description of the vehicle and which direction it is heading.