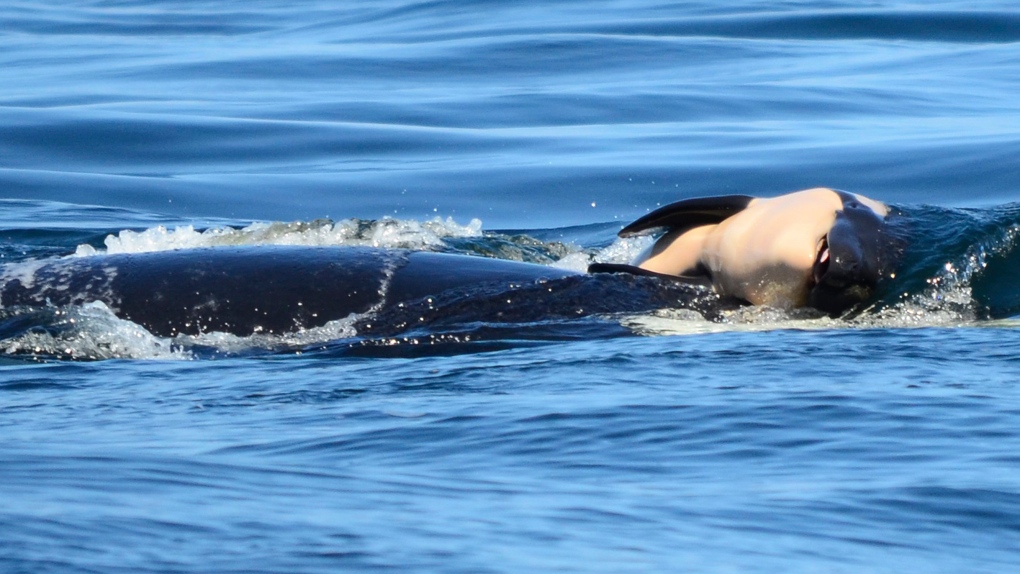 SEATTLE - The first calf born in three years to the endangered orcas that spend time in Pacific Northwest waters died Tuesday, the latest troubling sign for a population already at its lowest in more than three decades.

A dead orca was seen being pushed to the surface by her mother about a half hour after it was spotted alive, said Ken Balcomb, senior scientist with the Center for Whale Research on San Juan Island, which closely tracks individual whales.

The mother was seen propping the newborn on her forehead and trying to keep it near the surface of the water in the waters off the coast of Victoria, British Columbia, he said.

“The baby was so newborn it didn't have blubber. It kept sinking, and the mother would raise it to the surface,” he said Wednesday.

The death represents another reproductive failure for the salmon-eating southern resident killer whales that typically show up in Puget Sound waters from spring to fall.

The distinctive black-and-white orcas have struggled since they were listed as an endangered species in the U.S. and Canada over a decade ago. They're not getting enough of the large, fatty Chinook salmon that make up their main diet. They also face overlapping threats from toxic pollution and noise and disturbances from boats.

Female orcas have been having pregnancy problems because of nutritional stress linked to lack of salmon. A multi-year study last year by University of Washington and other researchers found that two-thirds of the orcas' pregnancies failed between 2007 and 2014.

About half of the 11 calves born during a celebrated baby boom several years ago have died.

“On average we expect a few calves born each year. The fact that we haven't seen any in several years and then to have reproductive failure is further evidence that we have a severe problem with the reproductive viability in the population,” said Brad Hanson, a wildlife biologist with the Northwest Fisheries Science Center in Seattle.

Adding to concerns is the health of a 4-year-old female orca known as J-50.

Hanson said she looked thin and “clearly emaciated” when he and others observed from a boat Saturday near San Juan Island while collecting the whale's breath samples.

The breath droplets will be analyzed for possible pathogens. It could be that the animal is starving, or some other disease process is resulting in them not wanting to eat, Hanson said.

Another researcher, Deborah Giles, who was out studying the whales had alerted Hanson to a foul odour on the orca's breath, a smell detected on other orcas that later died. But the whale did not smell as bad on Saturday.

“You could see the shape of her skull through her blubber,” said Giles, a biologist with the UW Center for Conservation Biology. “I've never seen an animal this emaciated make it. But I'm hopeful that she will bounce back.”

Several groups on Wednesday said the loss of the calf highlights the need for quick action.

Washington Gov. Jay Inslee signed an executive order in March directing state agencies to take immediate action to help the orcas. A statewide task force he formed has been meeting since May to come up with recommendations. A report is due later this year.

Since then, an adult male orca went missing in June and is presumed dead. There are now just 75 of the orcas, down from 98 in 1995.

“The death of the orca calf is a heartbreaking reminder of the urgency we face in saving these iconic animals,” the governor's spokesman Jaime Smith wrote in an email.

The task force is considering a range of efforts, from increasing hatchery production of salmon, training more private boats to help respond to oil spills, and prioritizing areas where important habitat can be restored.

But Balcomb and others say more aggressive measures are needed. They have called for the removal of four dams on the Lower Snake River to restore salmon runs. “We have to address the issue of salmon restoration, wild salmon particularly,” Balcomb said.

The orcas are distinct from other killer whales because they eat salmon rather than marine mammals. Individual whales are also identified by unique markings or variations in their fin shapes, and each whale is given a number and name. Their movements are closely tracked and photographed by researchers, whale watchers and fans.