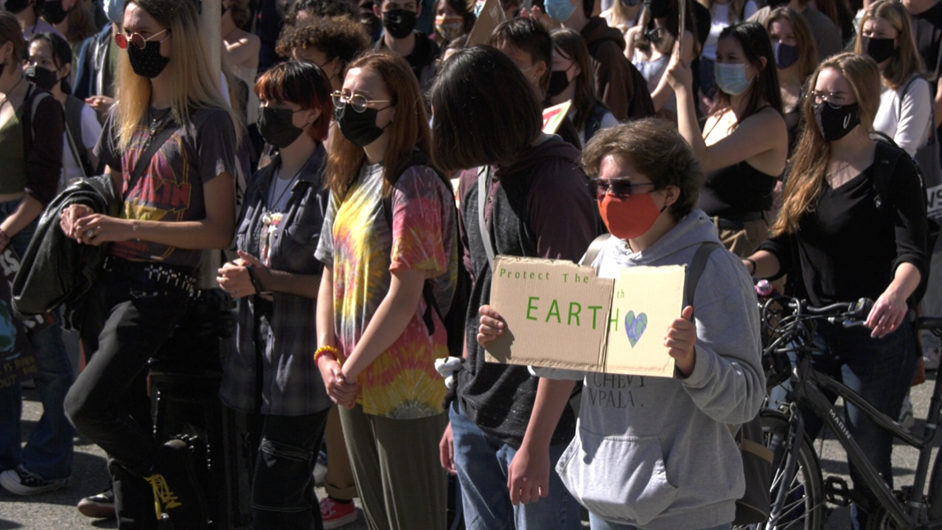 More than 300 middle and high school students from across Greater Victoria walked out of classes to take part in the “Our Earth – Our Future” strike for climate action on Friday.

The student strike was organized by two Vic High students who say they are rallying for all climate injustice, from old-growth logging in Fairy Creek to the plight of the endangered Southern Resident Killer whales. They say by holding the rally, youth will feel empowered to speak up and demand an end to the catastrophic effects of climate change.

“When we speak, it’s so important that we are heard by other people,” said rally co-organizer Solange Dorsainvile. “If it means we have to leave school and be on the streets so people can hear us, that’s what we have to do, because its our future and our children’s future.”

After acknowledging the territory and unceded rights of the Lekwungen and W̱SÁNEĆ speaking peoples, the group marched to Victoria’s Centennial Square.

Once there, students heard speeches from activists about the need to protect old-growth forests as a means sequester carbon and mitigate the effects of climate change.

“We’re fighting Canada’s lack of action against climate change,” said rally co-organizer Talia Collins. “It’s so frustrating to see all this talk about climate change and climate action, but no real action and no real laws are being put in place.”

Collins says she wants to see an end to fracking and is calling for an end to oil tanker traffic in the waters off Vancouver Island.

Collins says events, like the student strike, are important because they bring a diverse group of young people together to talk about the damaging effects of climate change.

Collins says she is calling for oil exploration and pipelines to be de-funded. She says companies and governments need to make more investments in green technology to end people’s reliance on fossil fuels.

“The future just needs to become more green,” said Collins. “We know our time is running out and we speak of economic balance, but there is no 50/50 balance between economic development and the environment as long as we continue to rely on fossil fuels.”

Collins says there needs to be a focused effort to expand public transit and produce green sources of electricity throughout the country.

“These are things that need to happen in order for us to meet our carbon goals by 2050,” said Collins. “I’m here because I want to give youth a platform and I want people to feel supported and uplifted.”

Collins says she and Dorsainvile will continue to organize student strikes until all levels of government take concrete steps to avert the climate crisis.

U.S. officials allege Canadian race car driver and Instagram influencer Josh Cartu and his brothers ran a 'massive fraudulent' trading operation between 2013 and 2017 that appears to have helped fund Cartu’s lavish lifestyle through multi-million-dollar transfers to off-shore bank accounts in the Caribbean.

The federal government is planning to unveil its plans for a vaccine passport designed for international travel on Thursday, CTV News has confirmed. Prime Minister Justin Trudeau and Finance Minister Chrystia Freeland are scheduled to speak to reporters at 10 a.m. ET, which CTVNews.ca will carry live.

Scientists in New Zealand have found that microplastics, which have been found in rivers, oceans, soil and animals, are also in the air we breathe and report that this airborne pollution is likely affecting climate change.

A report exploring the far-right in Ukraine’s military found that neo-Nazis and supporters of far-right groups in the ranks bragged online about receiving training from Canada and other NATO nations.

U.S. unveils COVID-19 vaccine rollout for children as Canada plans its own

U.S. officials have outlined a plan to roll out two doses of the Pfizer vaccine formulated for children aged 5-11 in the coming weeks — provided that the U.S. Food and Drug Administration approves Pfizer’s safety and efficacy data.

Saskatchewan’s Provincial Emergency Operations Centre said there are no plans to transfer more than six patients to Ontario as of Wednesday morning – contradicting information provided by health officials in Ontario.

NEW | Who is the Green Party's rookie MP Mike Morrice?

The Green Party endured some major setbacks this federal election, but among the blunders was one major victory: gaining its first seat in Ontario. Rookie MP Mike Morrice is to credit for that.

Trudeau urged to make decriminalization of illicit drugs a priority

Prime Minister Justin Trudeau is being urged to decriminalize the possession and use of illicit drugs as a way to combat the opioid crisis that has resulted in thousands of deaths in Canada.

Pattie Lovett-Reid: The perfect storm is brewing for cash-strapped Canadians

With inflation soaring, some economists are predicting that interest rate increases won't be far behind. CTV's chief financial commentator Pattie Lovett-Reid looks at what that means for your finances in her latest column on CTVNews.ca.