The lunch rush at Esquimalt’s Rainbow Kitchen, a dedicated charity meal program, was another busy one on Monday.

"We are serving upwards of 250 meals per day," said Ray Oelke, front of house manager at the Rainbow Kitchen.

That is more than double pre-pandemic numbers, "where we would serve about 100 to 120 people," Oelke says.

The need is now so great that Rainbow Kitchen has added a breakfast service, on top of the two school meal programs it launched in 2020.

It has also turned to giving people the option of a to-go meal because there is only so much room in the dining hall.

"As well, we try to do as much food-sharing as possible, so pseudo-food bank free [food] tables in order to get folks groceries," said Oelke.

Staff at Our Place in Victoria are preparing for their Thanksgiving lunch this coming Wednesday.

"We’ve been seeing increased demand so we’re expecting quite a few people this year," said Grant McKenzie, director of communications for Our Place.

Roughly 180 kilograms of turkey, 50 litres of gravy, 136 kilograms of potatoes and 50 pumpkin pies are being prepped.

That will serve 400 to 500 meals at the centre and 500 more at the various housing sites around the community that Our Place now runs. 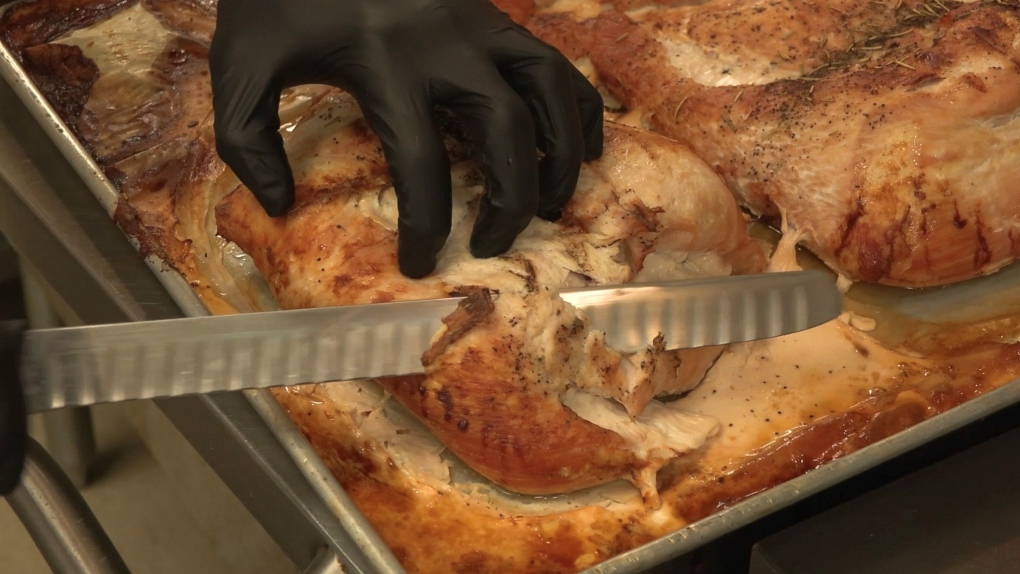 Turkey dinners are seen being prepared at Our Place in Victoria. (CTV News)

"We’re definitely seeing some people that have been 'reno-victed' who are out on the streets, and this meal is also for people who don’t necessarily have family," he said.

The Rainbow Kitchen will hold their Thanksgiving turkey lunch on Oct. 10. Last year, 400 meals were served.

"I’m expecting even more this year," said Oelke. "We are planning for about 500 to 600 meals to be made, just in case that many people show up at our door."

Global pressures, mixed with inflation in Canada, are pushing outreach organizations to the edge of what they can do.

Climate change, the war in Ukraine and supply chain issues are all contributing to a global rise in food prices.

"We are facing the perfect storm of perfect storms," said David Beasley, executive director of the World Food Programme.

He says around the world food insecurity has become much more common. It’s estimated that as many as 828 million people now go to bed hungry every night. Up to 50-million of those individuals are on the edge of famine.

"If we do not reach these people you will have famine and starvation," said Beasley. "You will have destabilization of nations around the planet and you will have mass migration unlike anything you’ve ever seen."