VICTORIA -- People in a Saanich neighbourhood known for its Halloween fun are telling visitors to stay home this year because of the COVID-19 pandemic.

South Valley Drive has become a destination for families, with fully decorated homes seeing hundreds of trick-or-treaters every year. Resident Moira McLean says due to physical distancing and small group requirements, people are better off in their own neighbourhoods this October.

“We're asking this year that if you don't live in this area, if you can't walk here, don't come here please,” she said.

McLean doesn’t want to spoil the party. “We love Halloween,” said the mother of twin boys. For more than a decade they’ve invited hundreds of trick-or-treaters to the door each Halloween. She’s already purchased a supply of candy and plans on hand-delivering individual bags to kids in the neighbourhood.

Elsewhere in Saanich, COVID-19 has caused the cancellation of an annual fright-fest. Peter Lyons has been transforming his home into a haunted house for 12 years.

Last year, he converted his property into a mock version of the Bates Motel, called Morbid Motel. He says 930 people visited on Halloween, raising more than $1,400 in donations for the Umbrella Society, which helps people suffering from addiction and mental health issues. 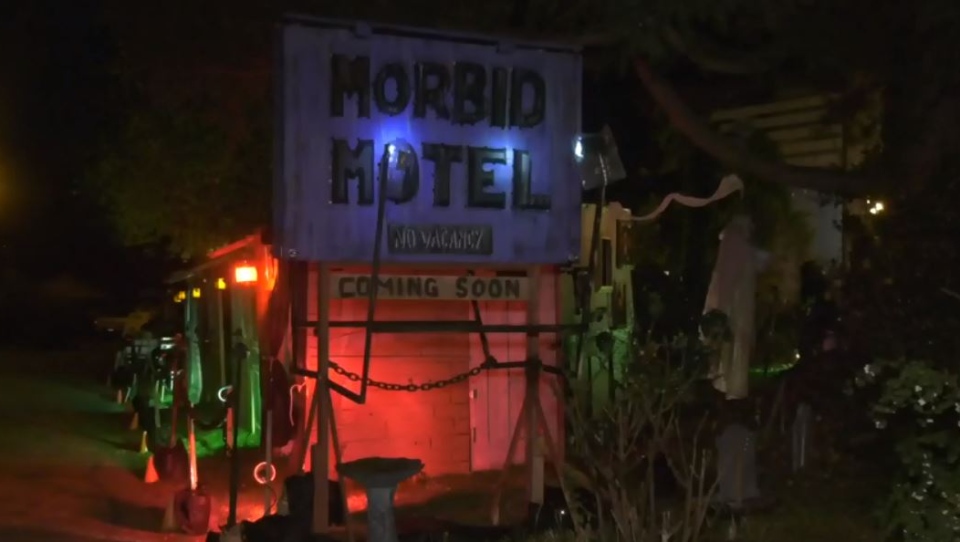 Last year’s spooky spectacle featured live actors, handmade sets, animatronics and was visited by more people than ever before. Curiosity is high again this year.

“All the kids in the neighbourhood are rolling by on their bikes saying ‘Are you open? What's the deal? What are you building this year?’”

Lyons already has an impressive display on his lawn, which by his standards is modest. But, in the interest of keeping crowds down this year, he won’t be handing out candy.

Langford’s Westhills neighbourhood is a Halloween hotspot and people there expect it to be busy. How the community plans to safely fill their treat bags this year remains a mystery, however.

John Cobb looks forward to the steady train of ghouls and goblins he sees at his door each year. “I suppose I could just pitch it down to them and they could stand at the bottom of the stairs,” said the 81-year-old from Britain.

If you’ve looked ahead on the calendar, you’ll know Halloween falls on a Saturday. It’s also a full moon.

For Peter Lyons, the party – although smaller – will continue.