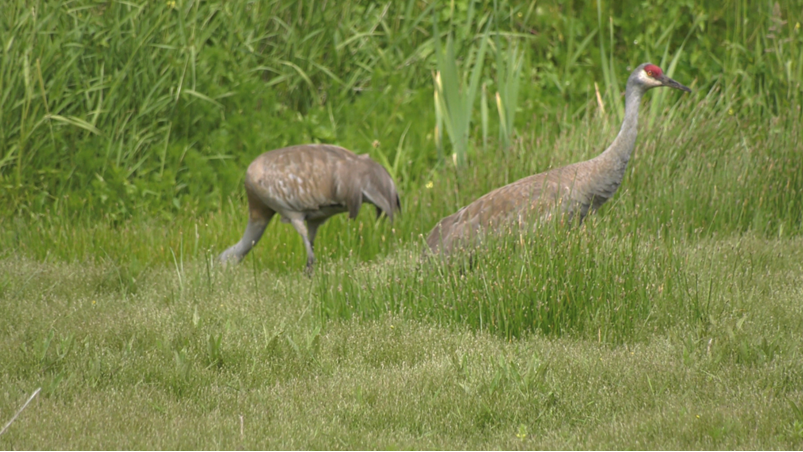 VICTORIA -- Victoria birdwatchers are flocking to Panama Flats after a pair of Sandhill cranes swooped in for a stopover.

The pair of rare cranes have been spotted feeding in the long grass of the Saanich wetland. Local bird experts say it is not uncommon for Sandhill cranes to migrate over southern Vancouver Island, but it is uncommon for them to land in the region.

“These guys are late and we’re quite surprised to see Sandhills still moving through the area,” said Rock Point Bird Observatory’s Ann Nightingale. “People may remember last fall Sandhill cranes were the big talk of the town because a couple dozen of them were in Metchosin, held up because of the fires (in the B.C. interior) and here we are lucky again to have Sandhill cranes here in Saanich.”

Nightingale says Sandhill cranes are a species that are quite common in Northern B.C., the Okanagan and in areas as far east as Saskatchewan. She says the birds are also more common on Northern Vancouver Island due to a small breeding colony located there.

“We don’t typically get a good look at them here, usually they’re just flying over our heads,” said Nightingale. “It is a treat for local birders because fall is usually the best time to see Sandhill cranes in the area (rather) than in the spring, so if they stick around like these two have it gives the birders a chance to get them on their 'year list.'”

The annual migration of the Sandhill crane takes it from as far north as the Yukon and Northern B.C to the southeastern United States. Nightingale says there may be a good reason why this pair has chosen to roost in Panama Flats on their flight north.

“What often happens is the non-breeders may not get all the way to the breeding grounds, so maybe these guys aren’t breeding this year,” said Nightingale. “They’re still moving north, but not in the same kind of hurry that a mated pair that intend to breed might be.”

Nightingale says it is unclear if the two cranes are a mated pair because it's common for Sandhill cranes to migrate in twos.

“You get birds travelling together, the old safety in numbers thing. They may be from the same flock and got separated from the main group or they could be siblings,” said Nightingale. “I don’t think they are off course. Because we have had such strange weather this spring we have seen a lot of birds in June that are not normally here in June.”

Nightingale says Panama Flats in Saanich has been hopping with rare birds in the past number of weeks. She says part of the reason for the sightings is the wetland still has water, which makes it a refuge for birds when they are migrating through the region.

“We see a turnover in birds here as they pass through,” said Nightingale. “It's a great feeding spot and a great resting spot for them.”

The pair of Sandhill cranes have been feeding in the long grass of Panama Flats for a few days and it is unlikely they will stay for much longer. Nightingale expects them to continue on their flight north in the next few days.

“They’re a bird that you can’t count on seeing and these are the first Sandhill cranes that have stuck around long enough that people can actually go to where the cranes are to try to get some good photos of them,” said Nightingale.