Generator stolen in Courtenay would cost $50,000 to replace, RCMP say 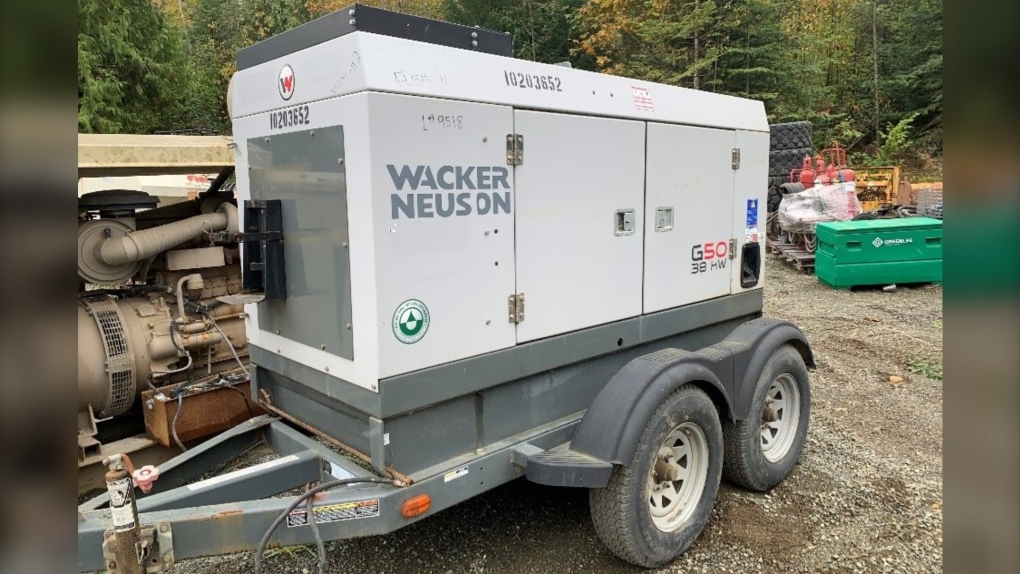 The stolen item is a Wacker Neuson G50 38kw mobile unit, and police believe the suspects used a truck to pull it off the property. (Comox Valley RCMP)

VANCOUVER -- Mounties in Vancouver Island's Comox Valley are asking the public for help recovering a stolen generator worth tens of thousands of dollars.

The theft was reported on Thursday, Comox Valley RCMP said in a news release. Sometime after 8 p.m. Wednesday night, a suspect or suspects cut the lock on the gate at a construction site near Maple Lake in Courtenay and stole the trailer-sized generator, police said.

The stolen item is a Wacker Neuson G50 38kw mobile unit, and police believe the suspects used a truck to pull it off the property. They may have travelled south onto the Inland Island Highway, police said.

“We are hopeful someone saw them in the area, since they would have required some time to pull over and cut a chain off one of the tires” said Const. Monika Terragni, media relations officer for Comox Valley RCMP, in the news release.

“This unit would cost approximately $50,000 to replace and is integral to the operation of one of our local businesses,” she added.

Police said the generator theft may be related to another break-in that occurred during the same general time period. The other break-in happened in the 4000 block of Minto Road in Courtenay, and the suspect or suspects in that incident cut a chain-link fence and stole some welding goggles, a Milwaukee impact driver and an acetylene bottle, according to police.

Anyone with information about either of the break-ins should contact the Comox Valley RCMP at 250-338-1321, police said, adding that tips can also be provided anonymously via Crime Stoppers at 800-222-8477.