A B.C. couple is giving new meaning to the term “west coast living,” and hopes to inspire others to do the same.

Wayne Adams and Catherine King have made international headlines for living on an artificial, off-the-grid floating island they built in an isolated cove near Tofino.

The man-made island dubbed “Freedom Cove” was built on top of recycled fish farms and includes a main house and several outbuildings, including four greenhouses – but it wasn’t always that way.

“It was just a small studio and a salad garden,” says Adams. “Just started a little salad garden and now we’re floating a million pounds of garden.”

The remarkable structure has been covered by numerous media outlets in Canada and beyond.

The couple started their dream in the cove, about a 30-minute boat ride from Tofino, 25 years ago.

“I built a lot of things before I started this project and I was 43 when I did, and I’m 69 now,” Asays. “It’s something I always wanted to do and I just couldn’t turn down the opportunity when it came up.”

Everything they consume is either caught fresh from the ocean or grown themselves.

“I grow all my own vegetables and I’m able to grow year-round,” says King. “Seasonally, I have fruits and berries and herbs and edible flowers as well.” 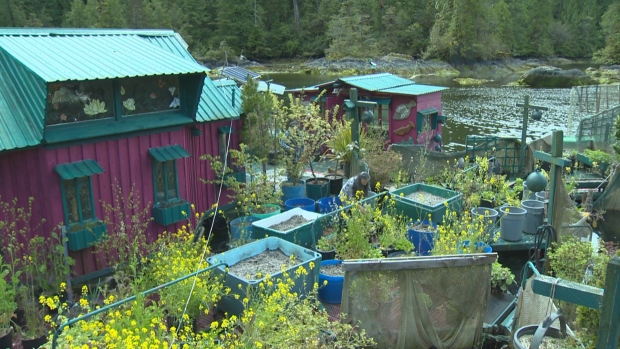 She says they’re self-sufficient for power as well, while water is gravity-fed from a nearby waterfall.

The couple has used found and repurposed items to build the floating island, such as the glass in their living room floor that came from a hockey arena in Victoria.

“Our place is always transforming and so my mind is always open to the next transformation. Nature sometimes inspires that through storm damage, and that’s okay,” says King.

But how do you pass the time on a floating island in the middle of nowhere?

The couple spends their days making crafts like carvings and elaborate mask creations of out feathers that birds leave at the cove.

“People coming from all over the world have told us that they’ve never seen anything like what we do, so we’re pretty unique," she says.

It’s the uniqueness that’s inspiring others from around the world to pursue their dreams as well. 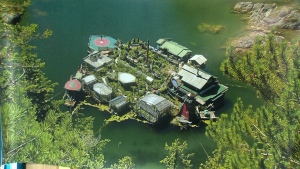